Marking the first day of the National Tinnitus Awareness week 2020, The Biggest Show on Earth on Tinnitus in Guildford provided a great opportunity for audiologists, ENT specialists, audio-vestibular physicians, psychologists, GPs, researchers, other health and social care professionals as well as the general public to learn more about the latest developments in assessment and management of tinnitus with talks from five expert speakers including visiting Professors from the University of Cambridge and University at Buffalo, United States.

Hosted at G Live theatre and organised by the Audiology Department from the Royal Surrey NHS Foundation Trust there were 16 exhibitions on audiology specialities (Tinnitus, Hyperacusis and Misophonia Clinics, Vestibular Diagnostic and Rehabilitation, Paediatric Audiology, Complex Clinics, Private Hearing Aids, CPD, Q&A), hearing care charities and local volunteer services (Surrey Coalition for Disabled People, HearHere, Hard of Hearing Forum, & Royal Surrey Charity), and hearing aid manufacturers (Starkey, Oticon and Phonak). In addition, there were 20 research posters on display covering a wide spectrum of clinical topics on tinnitus and hyperacusis ranging from how to make audiological tests more comfortable for tinnitus and hyperacusis suffers, and how to diagnose hyperacusis to cognitive therapy, mental health, insomnia, and the relationship between tinnitus loudness and severity of hearing loss. The posters exhibition was very well received by participants and generated a lot ofdiscussions. 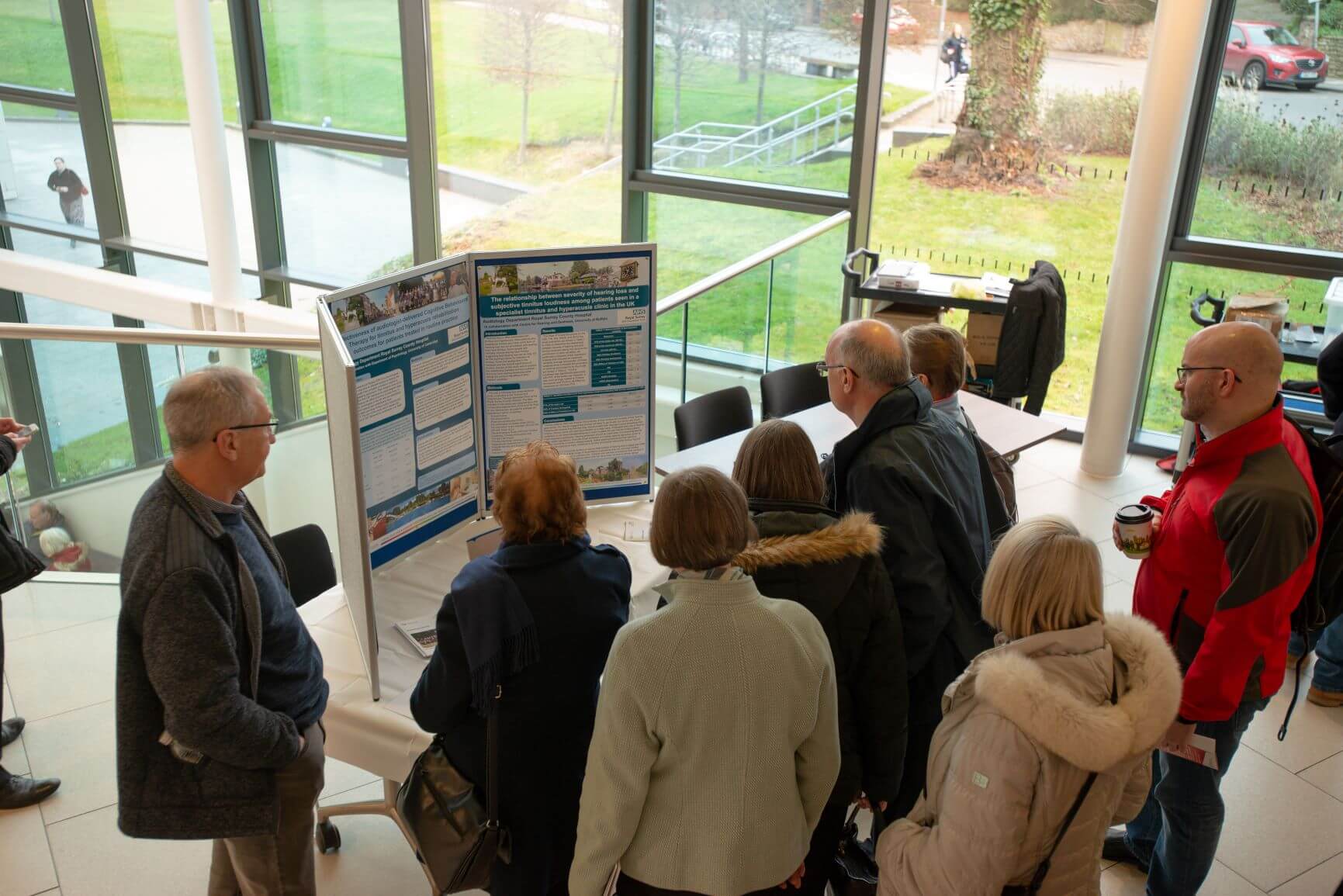 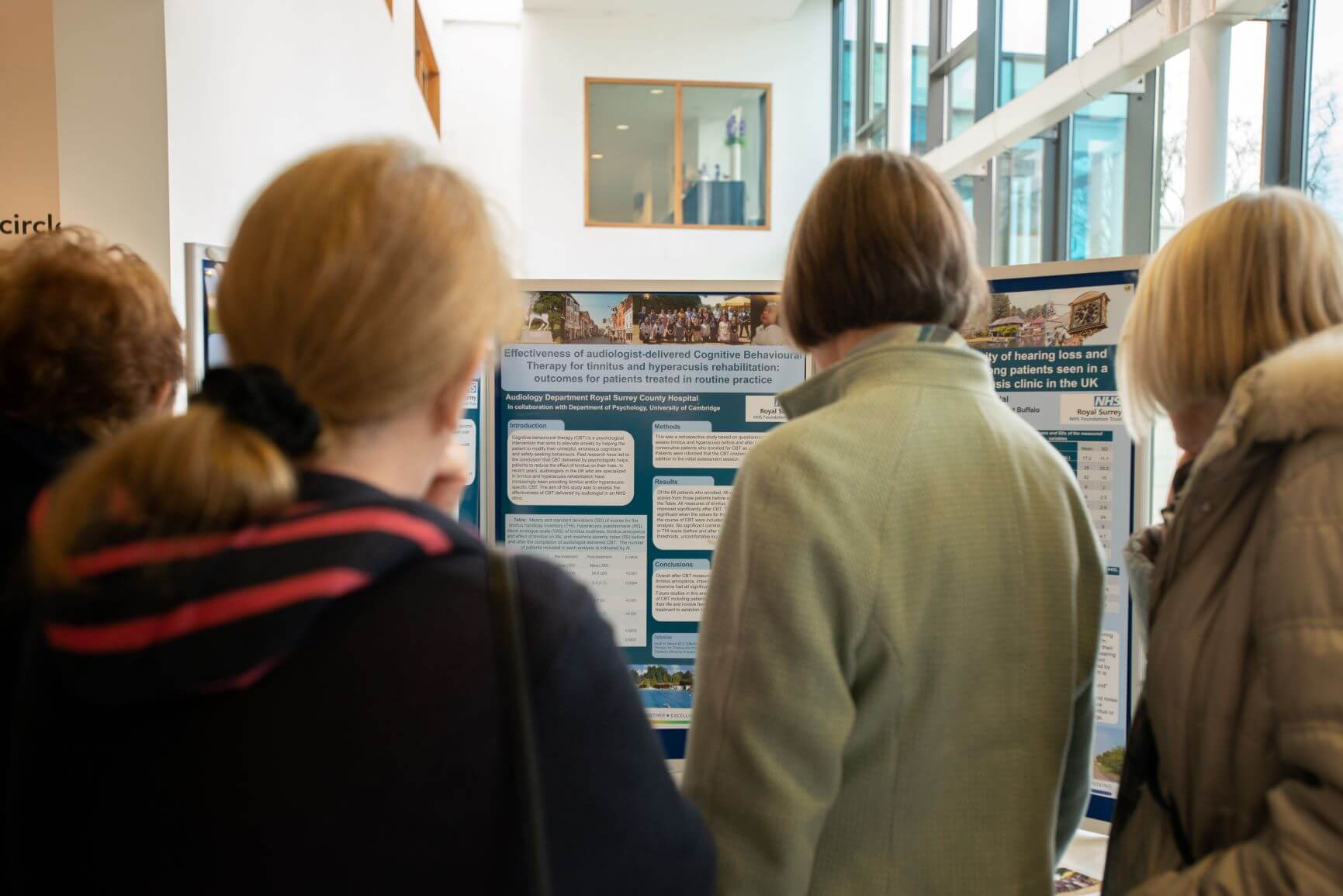 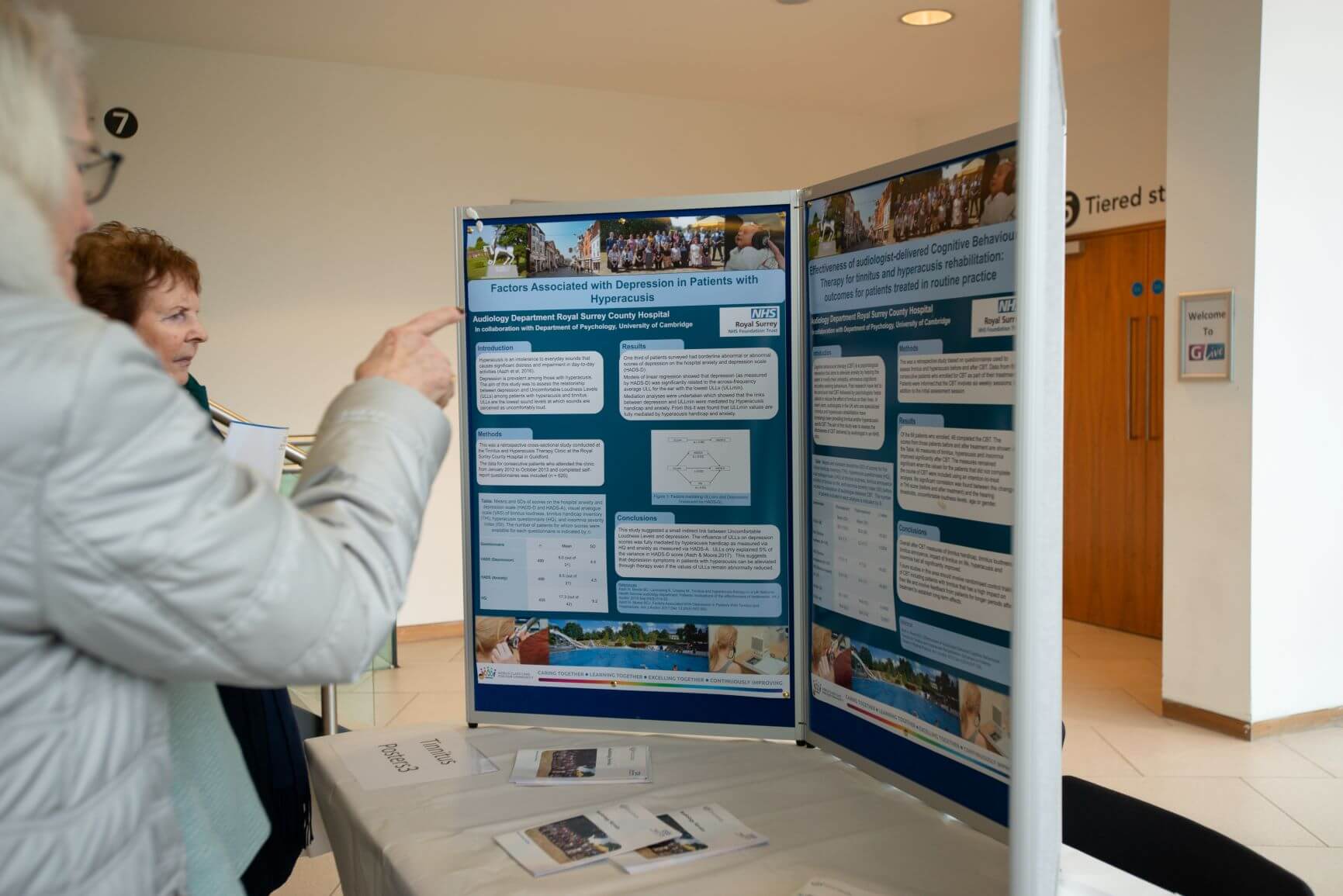 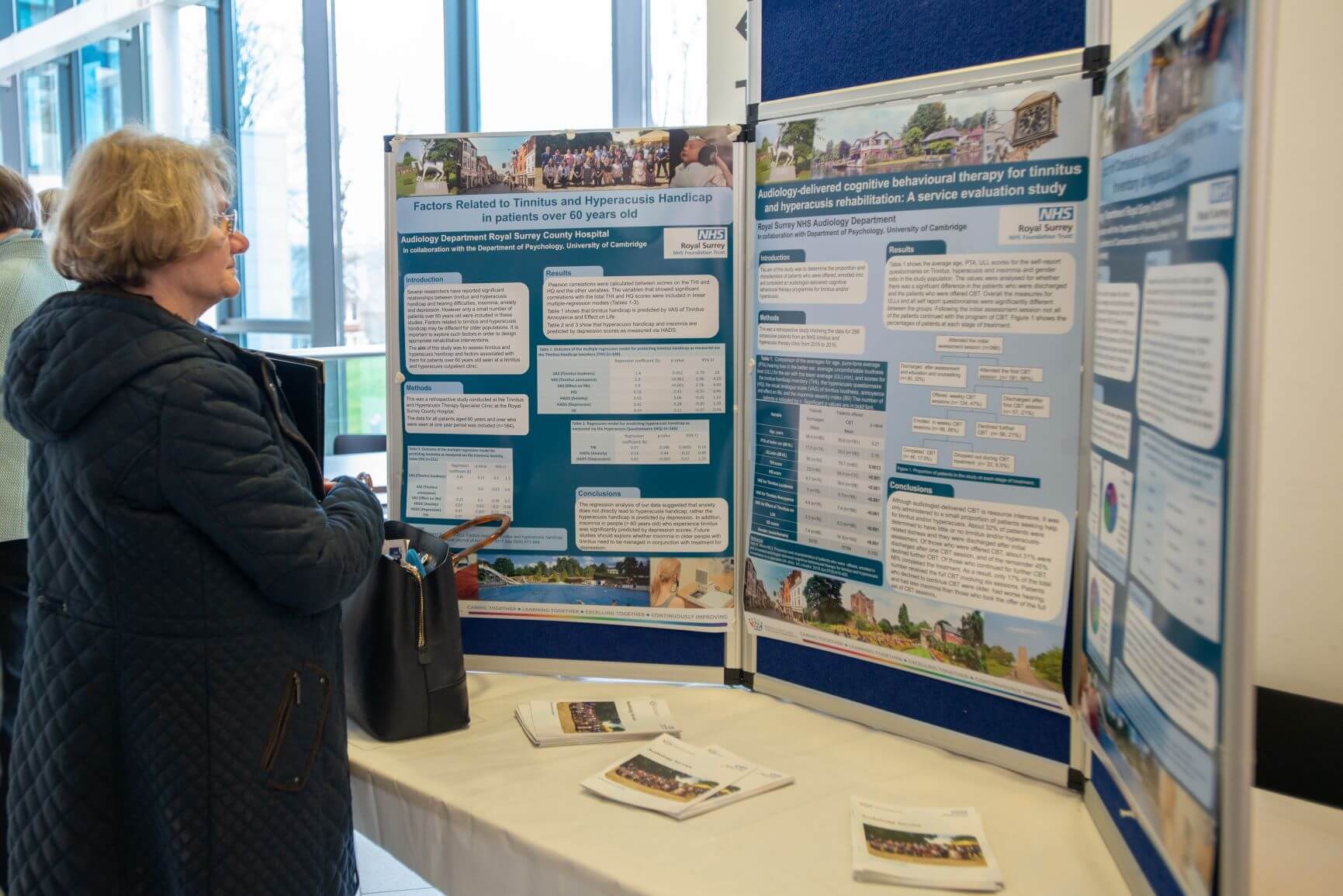 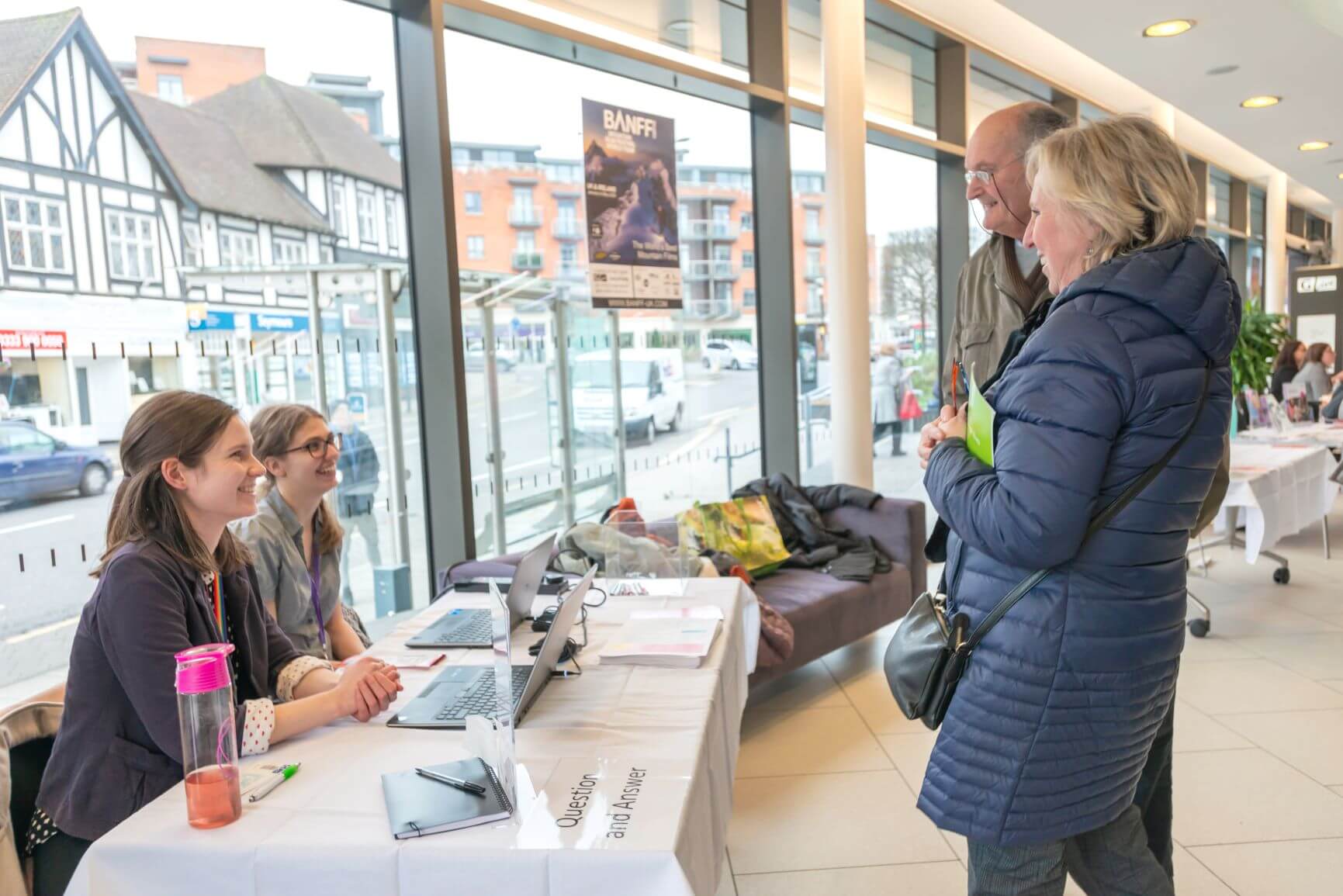 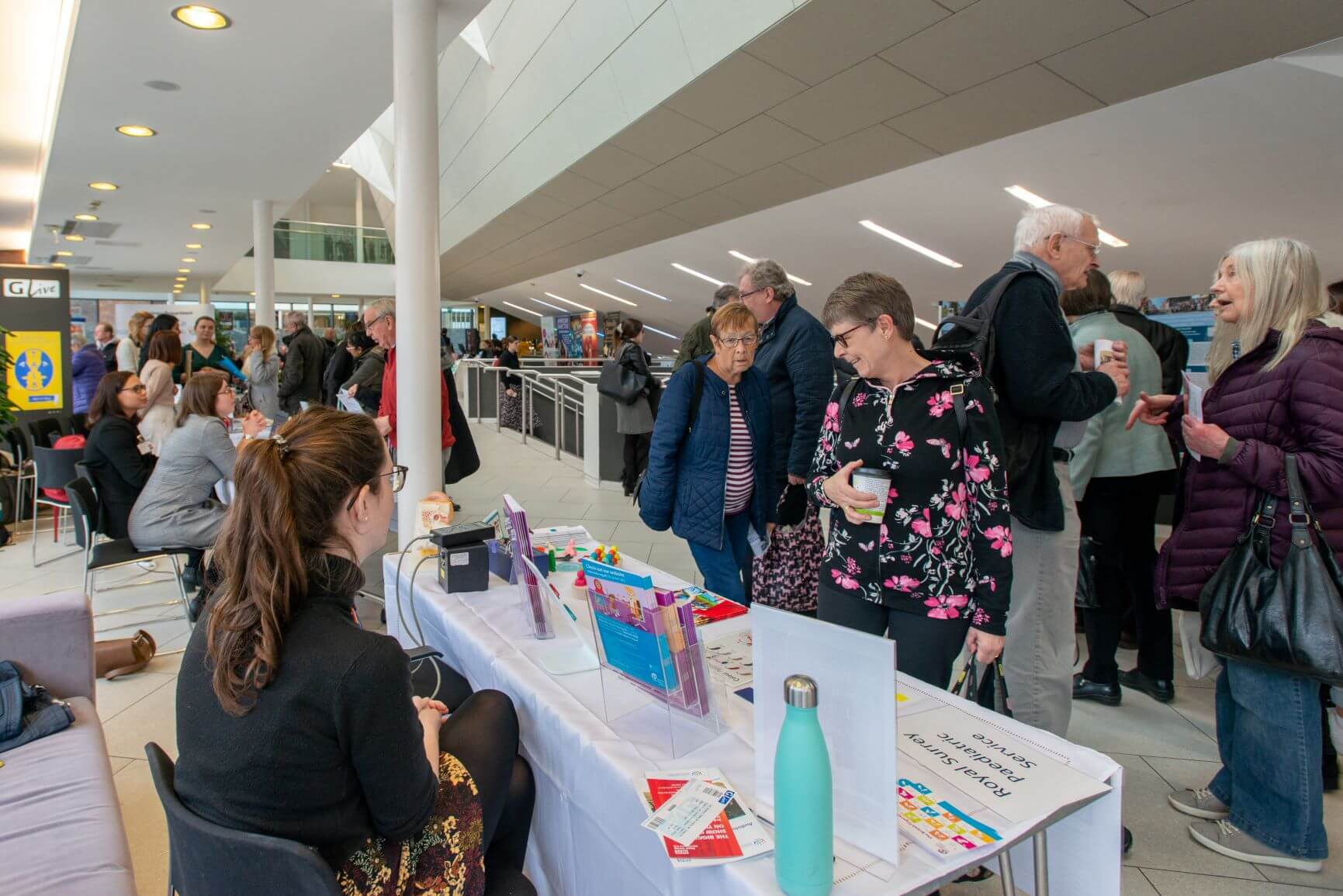 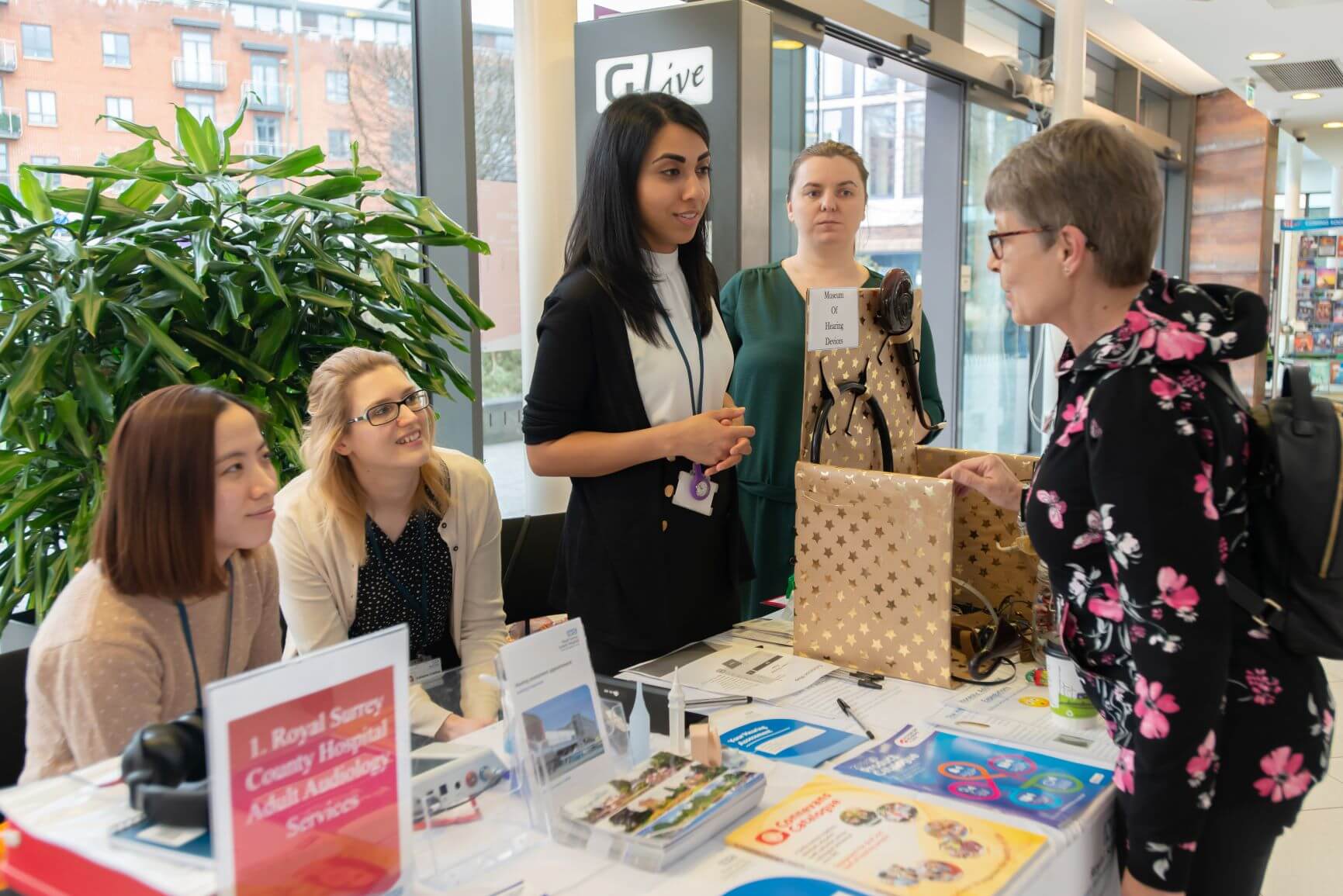 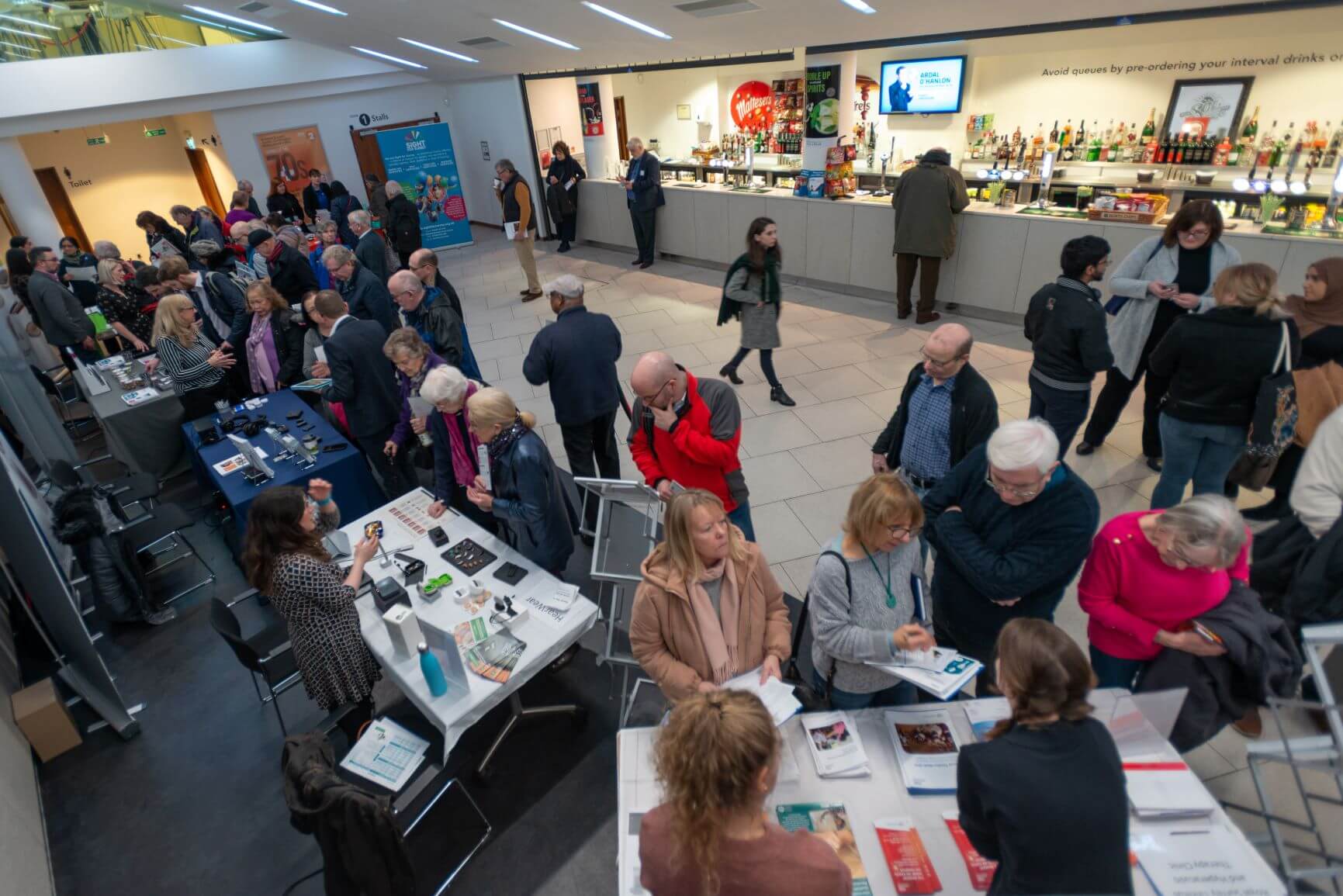 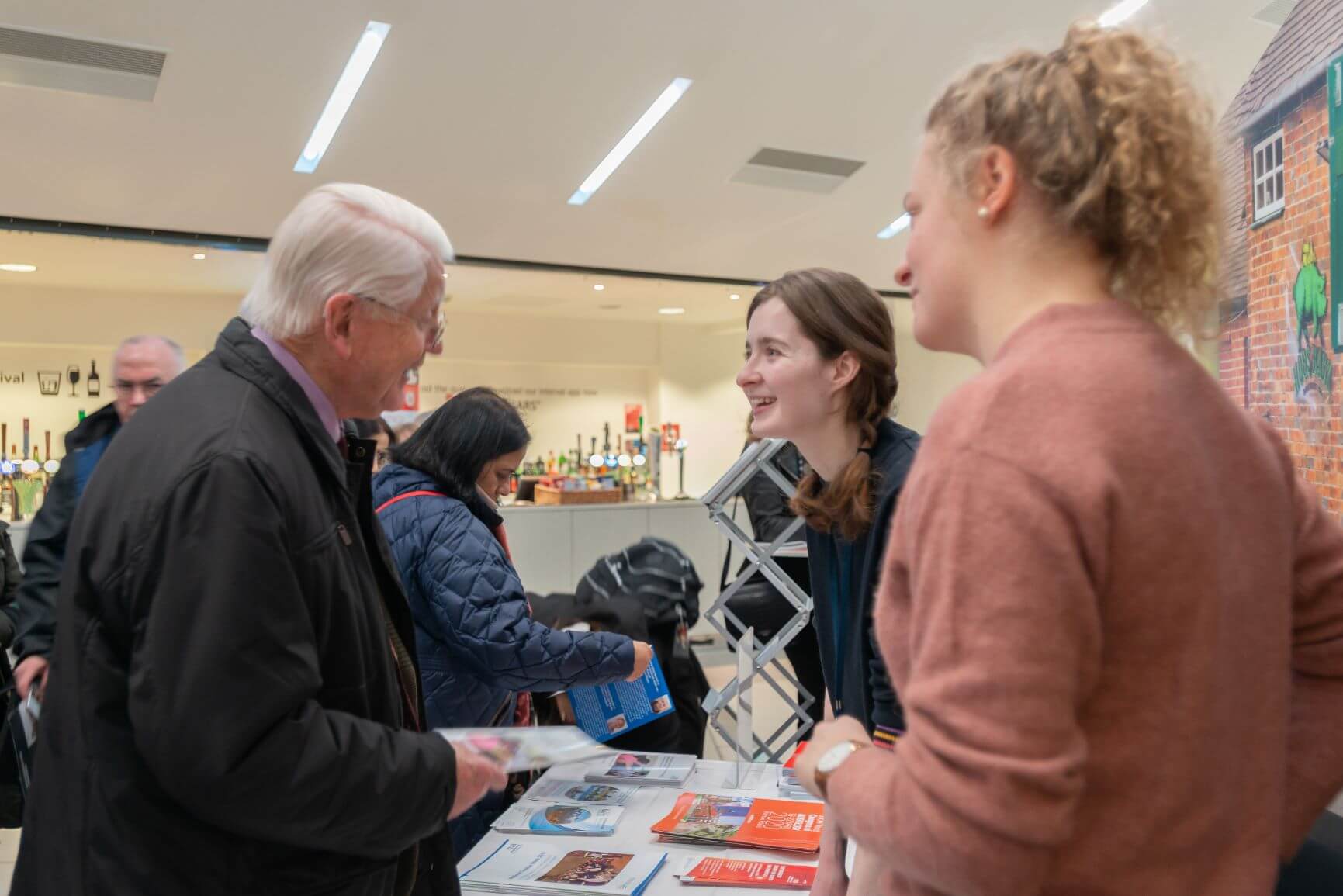 Over 800 people attended this event. The Worshipful the Mayor of Guildford, Councillor Richard Billington, officially opened the seminar. 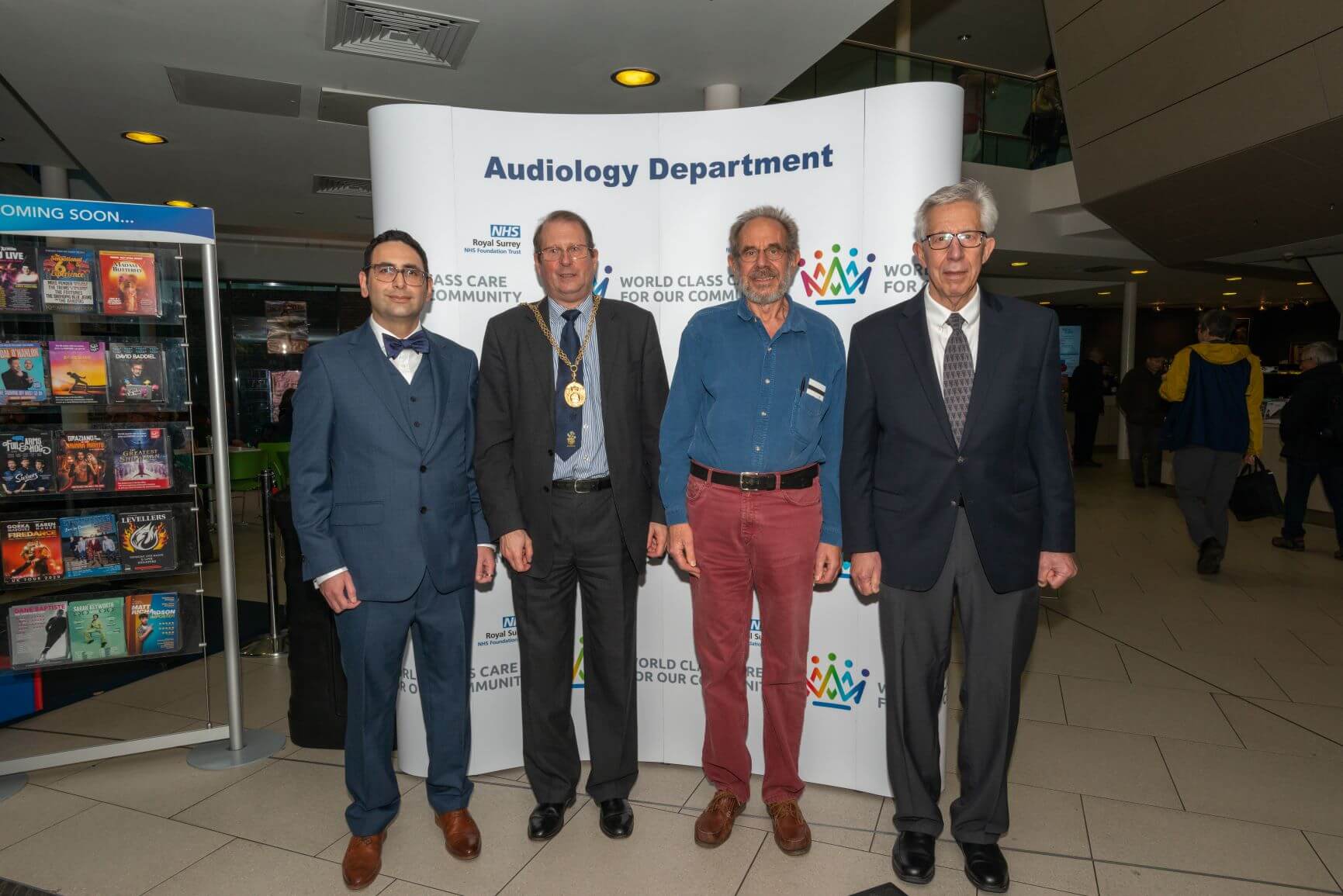 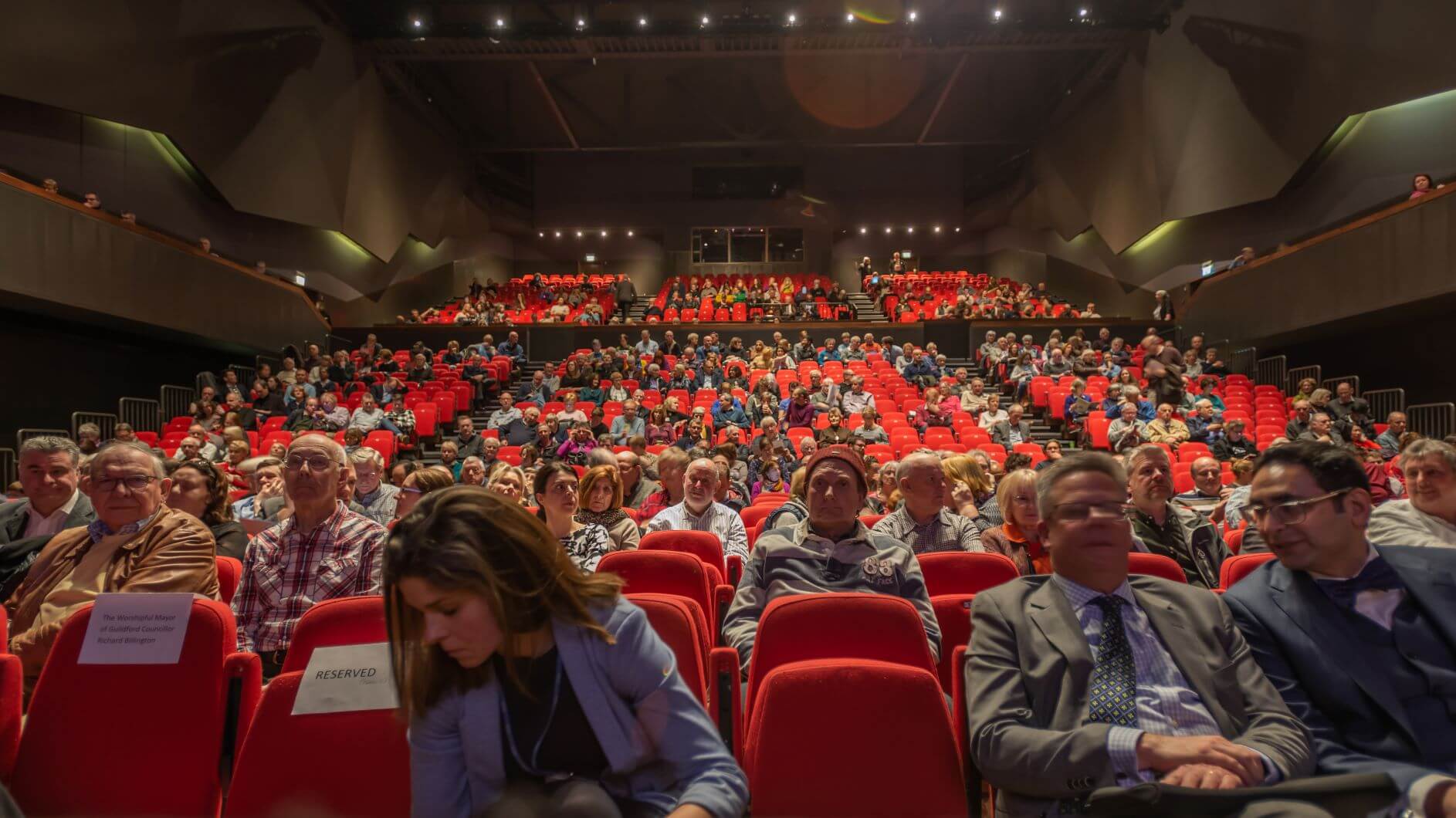 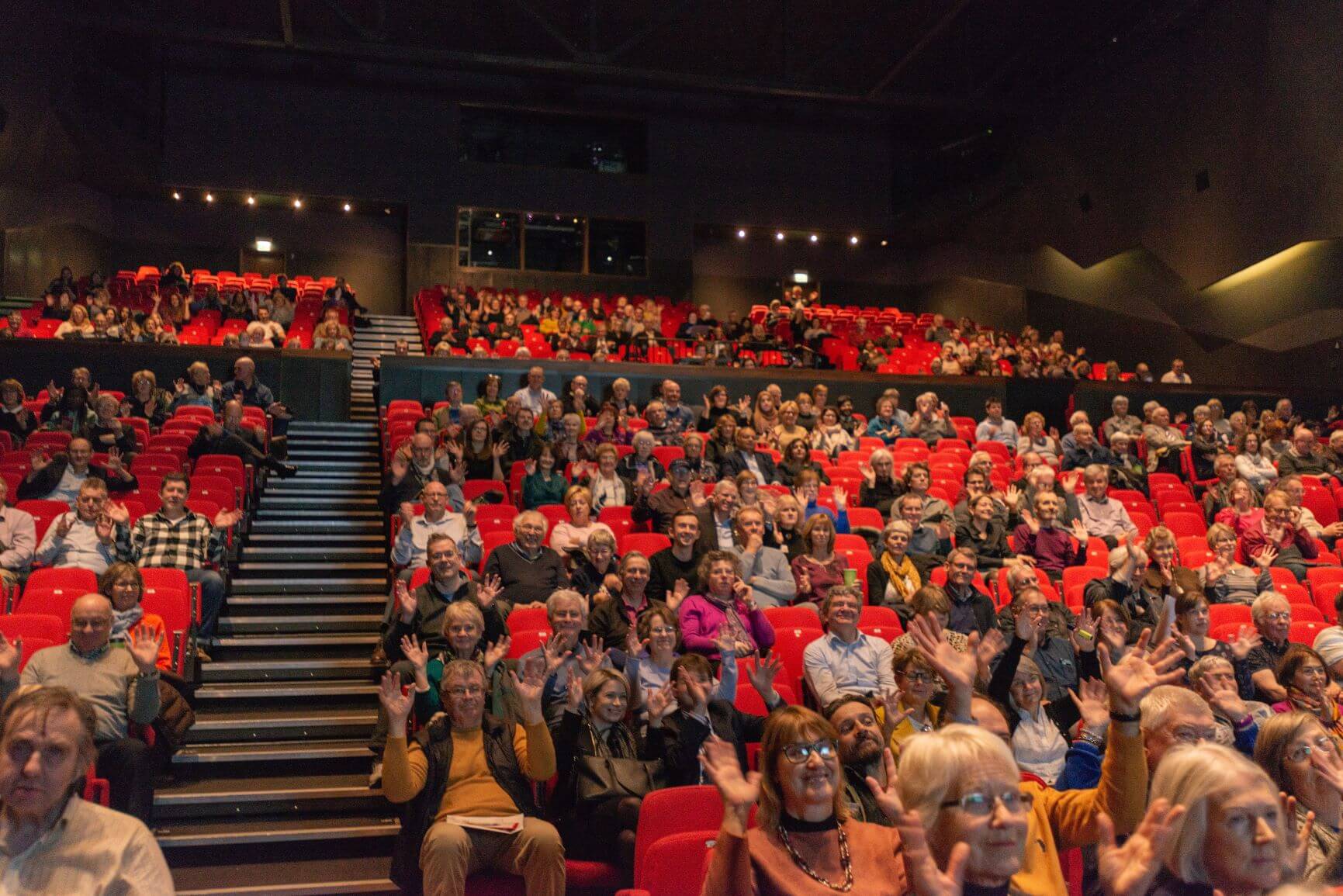 The CEO of the Royal Surrey, Louise Stead, awarded Dr. Hashir Aazh (Tinnitus team-lead) with certificate of excellence in recognition of his outstanding accomplishments in advancement of audiology services at Royal Surrey. 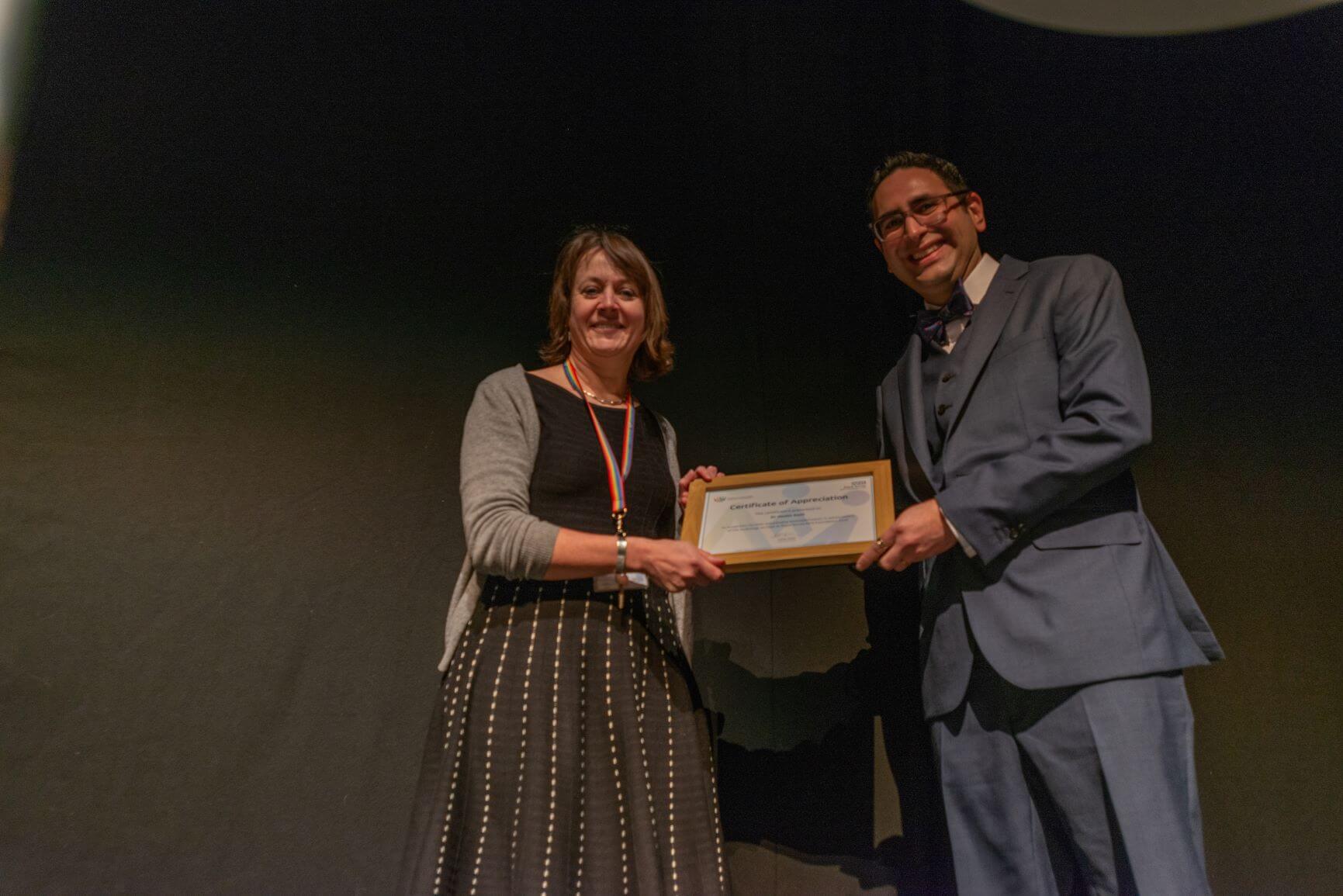 Karen Lammaing (Head of Audiology) offered an introduction to the event. She also talked about various specialist services which are offered by the Audiology Department with 38 members of staff. Judith Ballinger was the event hostess and presenter. She introduced the speakers and asked the audience to use British Sign Language applause ‘silent jazz hands’ instead of clapping hands in order to minimise possible discomfort for hearing aid users and those with hyperacusis. Loop system was is use and members of audiology team ensured that hearing aid users were aware of this and assistance was provided if anyone had difficulties using the loop system. In addition, palantypists (speech to text reporter) and sign language interpreters were present throughout the event. 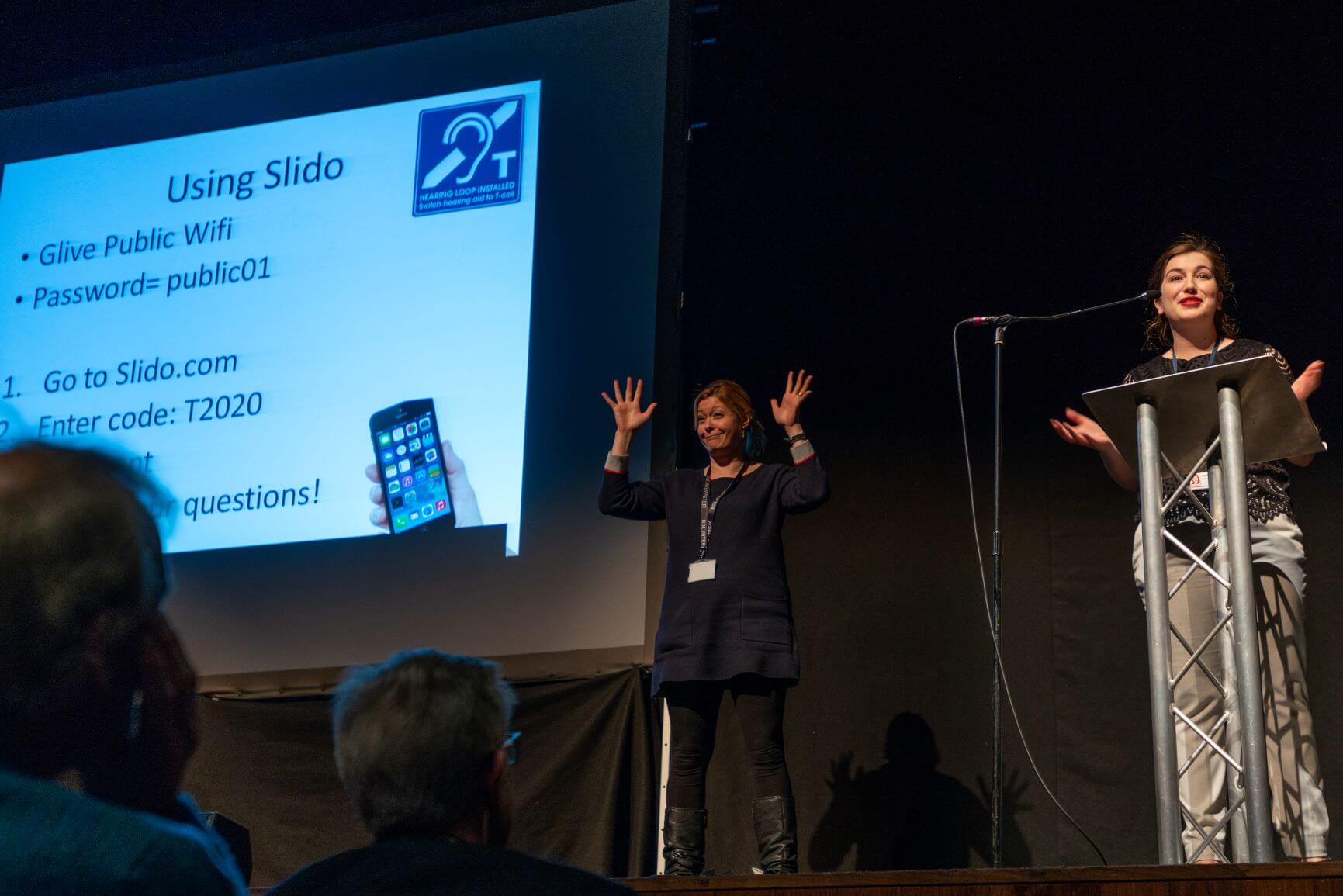 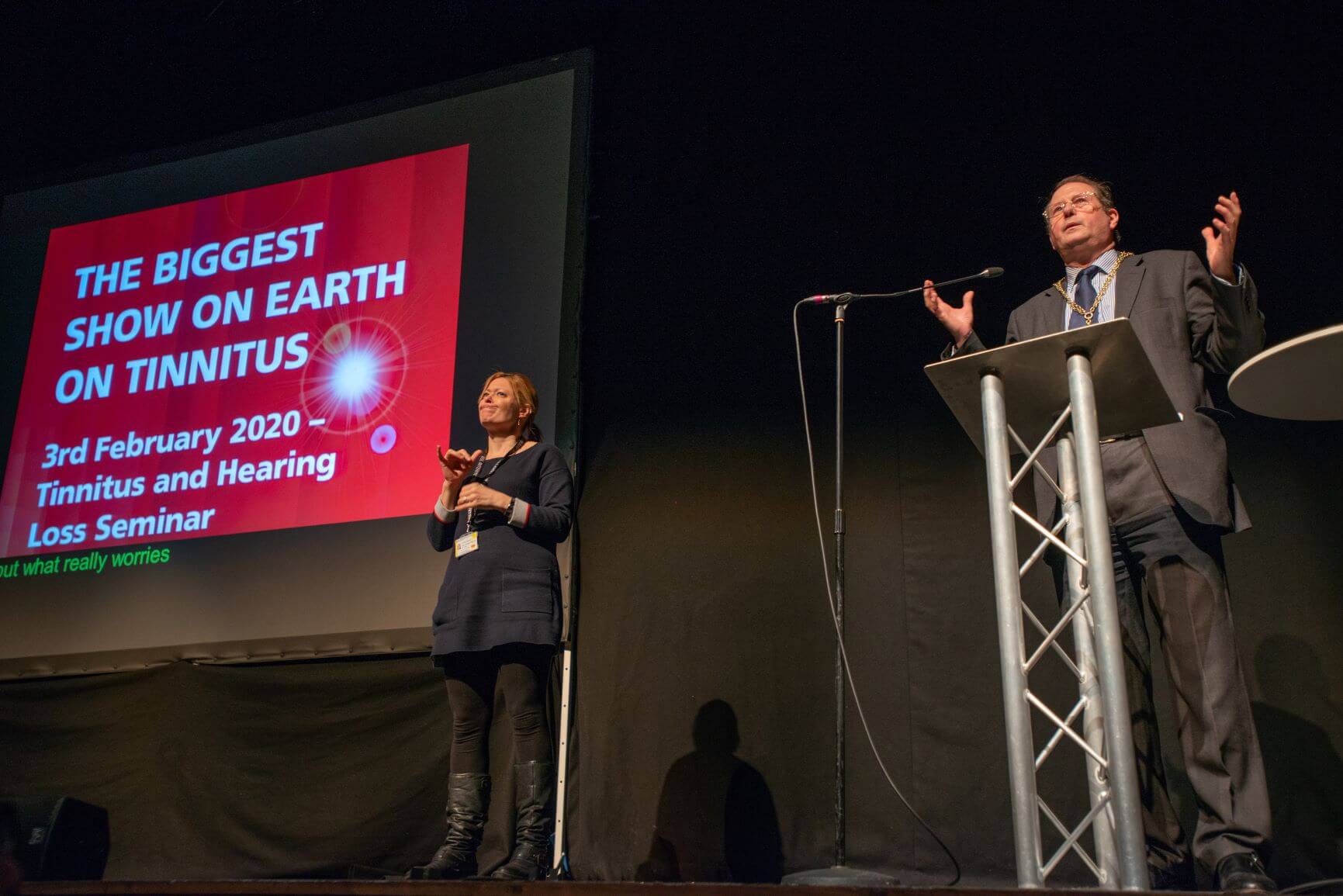 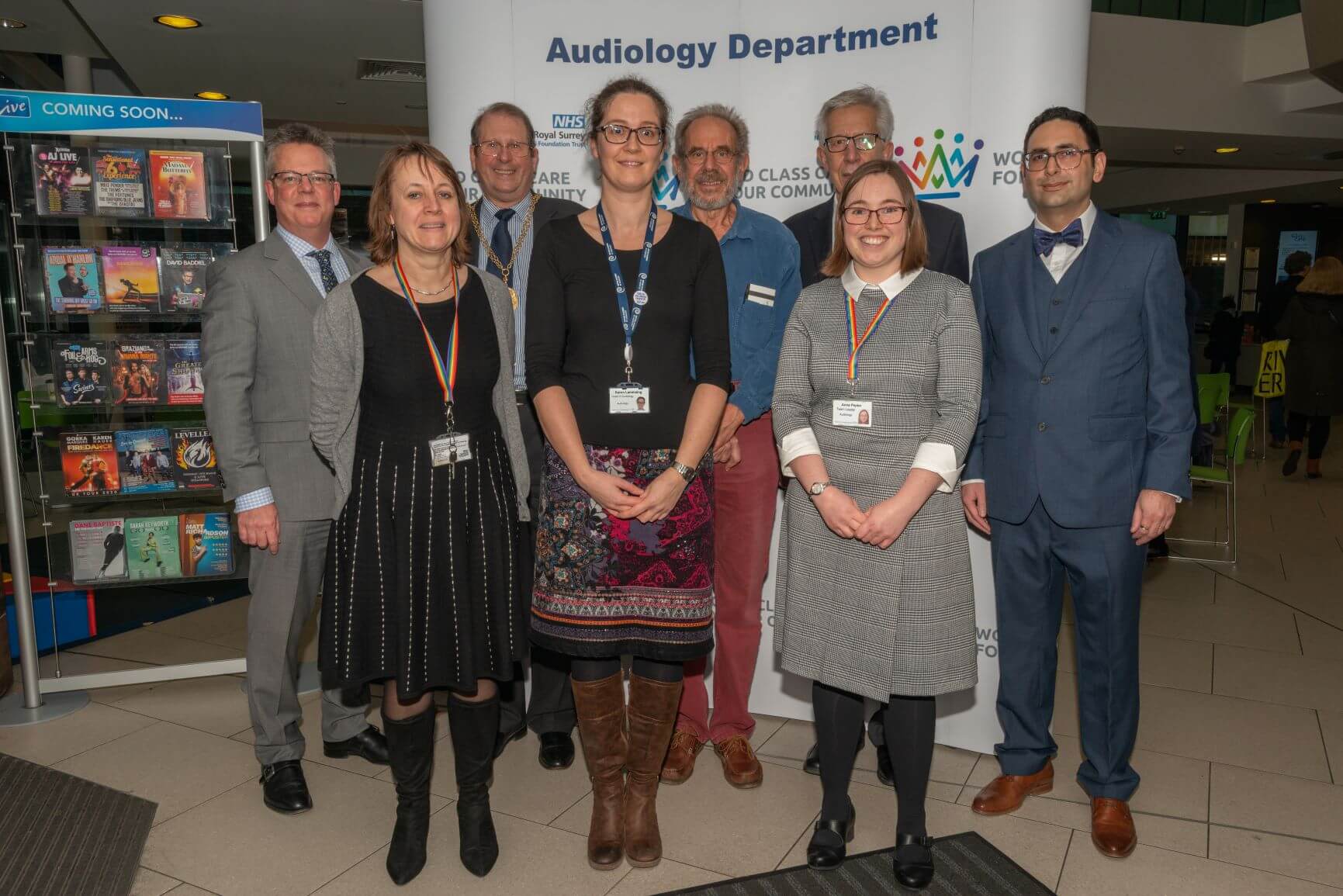 The first speaker was Professor Richard J. Salvi who is the director of the University at Buffalos Centre for Hearing and Deafness, USA. He talked about his research on human brain imaging and animal models of tinnitus, hyperacusis and hearing loss. Tinnitus and hyperacusis are often triggered by damage to cochlear portion of the inner ear. Tinnitus and hyperacusis were originally believed to be generated at the location of the lesion within the cochlea. However, recent human brain imaging studies as well research on animal models now suggest that tinnitus and hyperacusis arise from aberrant neuroplastic changes in the central auditory system and other portions of the nervous system involved with memory, emotion and arousal. He presented experimental evidence showing that hearing loss causes the neural output of the cochlea to decrease. However, as these weak neural signal from the cochlea are relayed up through the ascending auditory pathway, the signals are progressively amplified. In some cases, the neural amplification is excessive and results in spontaneous hyperactivity, sound-evoked hyperactivity and aberrant functional connectivity. He concluded that these aberrant neurophysiological changes have been linked to tinnitus and hyperacusis in both humans and/or animal models. 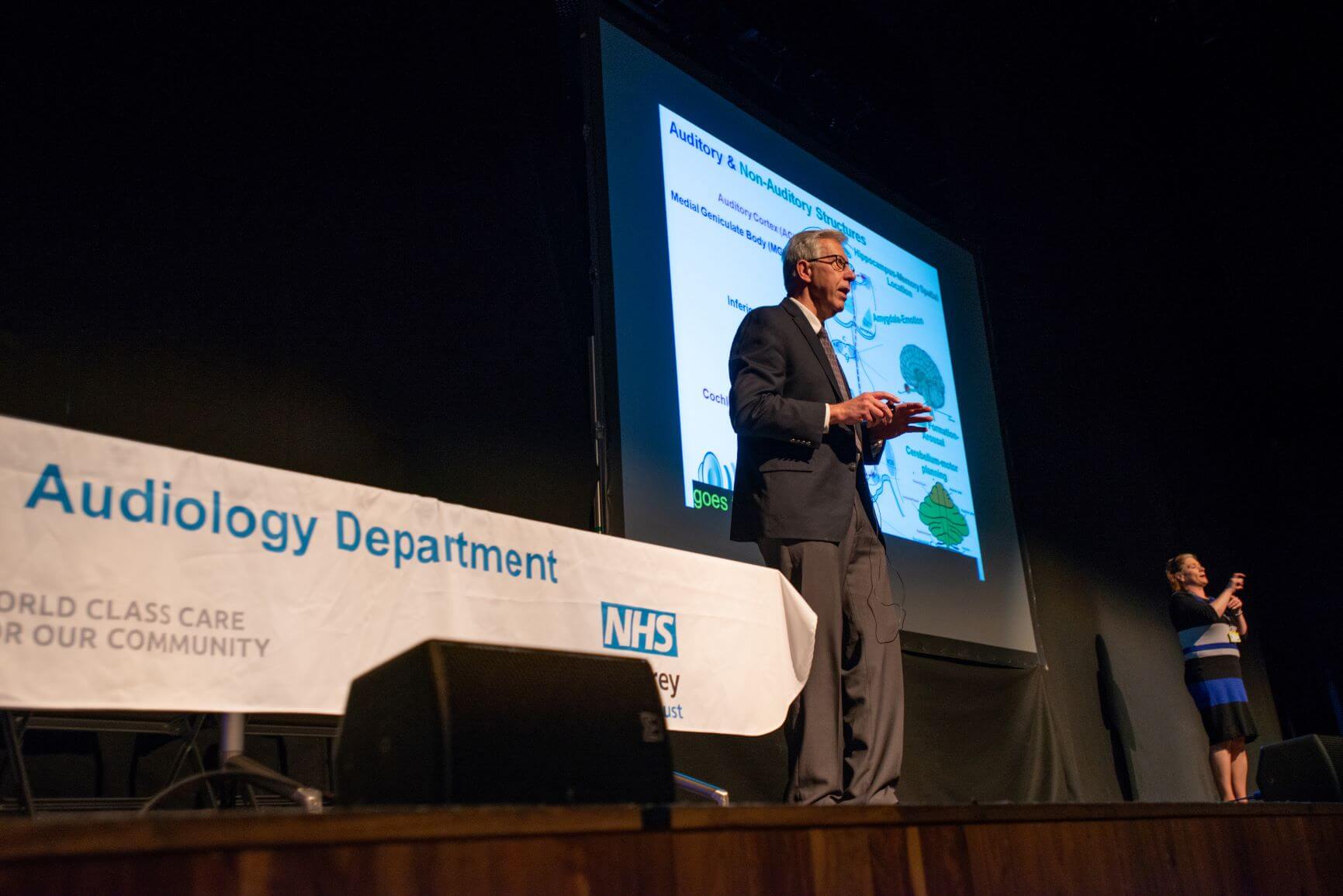 The second speaker was Professor Brian C.J. Moore who is an Emeritus Professor of Auditory Perception in the University of Cambridge. He reviewed the research evidence about the use of therapeutic sounds to alleviate tinnitus. He followed up on the conclusion made by Professor Salvi that tinnitus may arise as a result of changes in the central auditory system (“increased gain”), following damage to the peripheral auditory system (either hearing loss as revealed in the audiogram or loss of synapses and neurons without a measurable effect on the audiogram). He described that if this theory is correct, then it might be possible to partially reverse the central changes (i.e. to reduce the central gain) by increasing the input from the auditory periphery, either via hearing aids or via the use of therapeutic sounds. He offered a comprehensive review of the earlier studies that used sounds in attempts to mask the tinnitus, i.e. to make the tinnitus inaudible. Past research and clinical experience shown that masking is not possible for all people with tinnitus and even when it can be done it may be necessary to make the external sounds very intense in order to maintain masking. Nowadays, therapeutic sounds are usually adjusted so that they appear to be of similar loudness to the tinnitus. Most hearing aid manufacturers have dedicated programs including a variety of therapeutic sounds. He concluded by highlighting the need for well-controlled clinical trials of the effectiveness of therapeutic sounds for alleviating tinnitus. 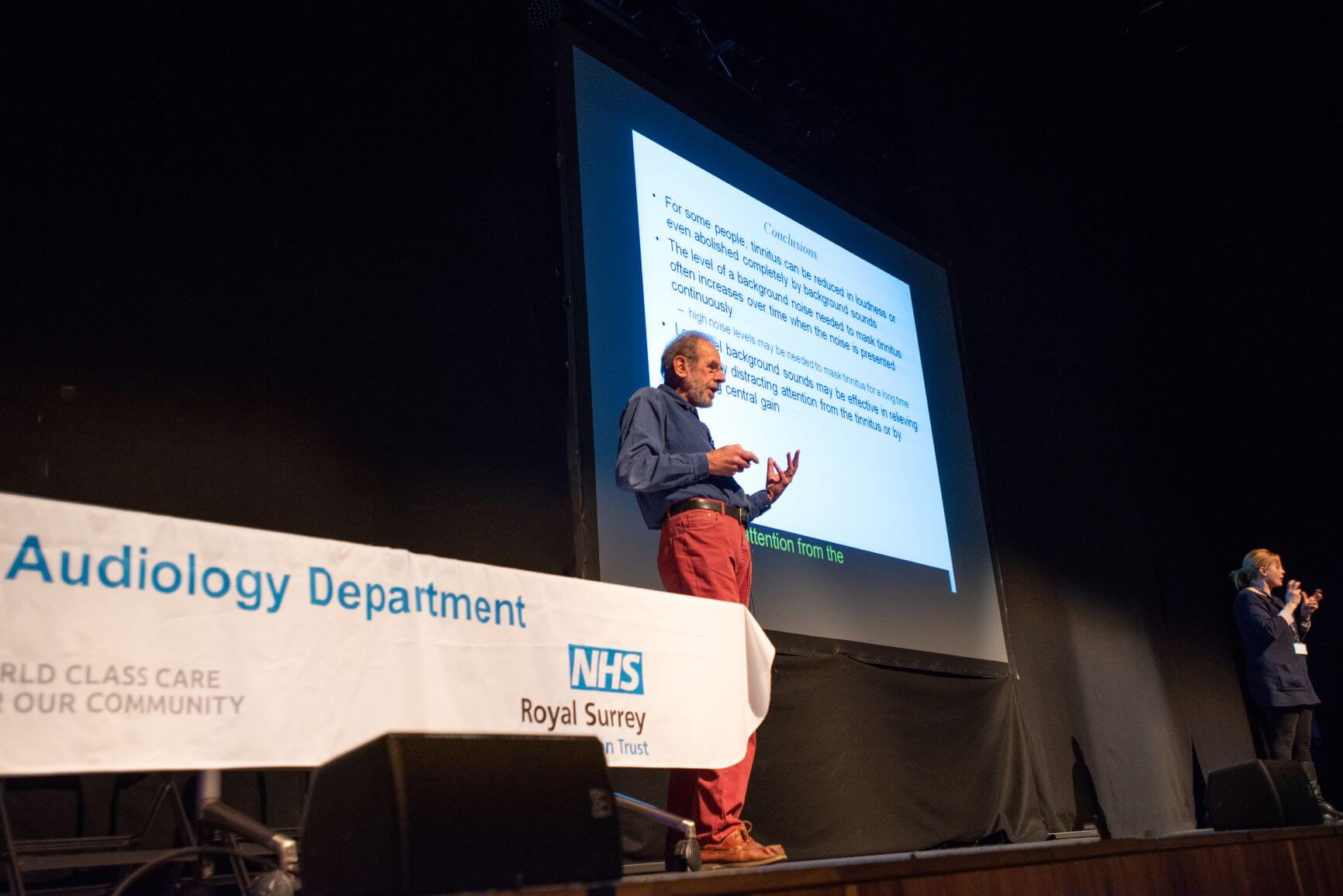 The 3rd presentation was given by Mr Peter Valentine who is a Consultant ENT Surgeon at the Royal Surrey County Hospital, specialising in ear surgery & the treatment of hearing and balance disorders. This was one of the most interesting presentations of the evening as he shared some videos of surgical procedures which can treat certain types of middle ear disorders which in some patients lead to minimising the perception of tinnitus. He described that most cases of tinnitus are associated with deterioration of hearing due to age or noise exposure. There are, however, some examples of tinnitus that are associated with particular medical conditions. Examples that commonly include tinnitus combined with hearing loss as symptoms include otosclerosis, ear infections, Menieres disease, and disorders of the auditory nerve. He concluded by discussing the treatment procedures he uses in his clinic to help patients experiencing such conditions. 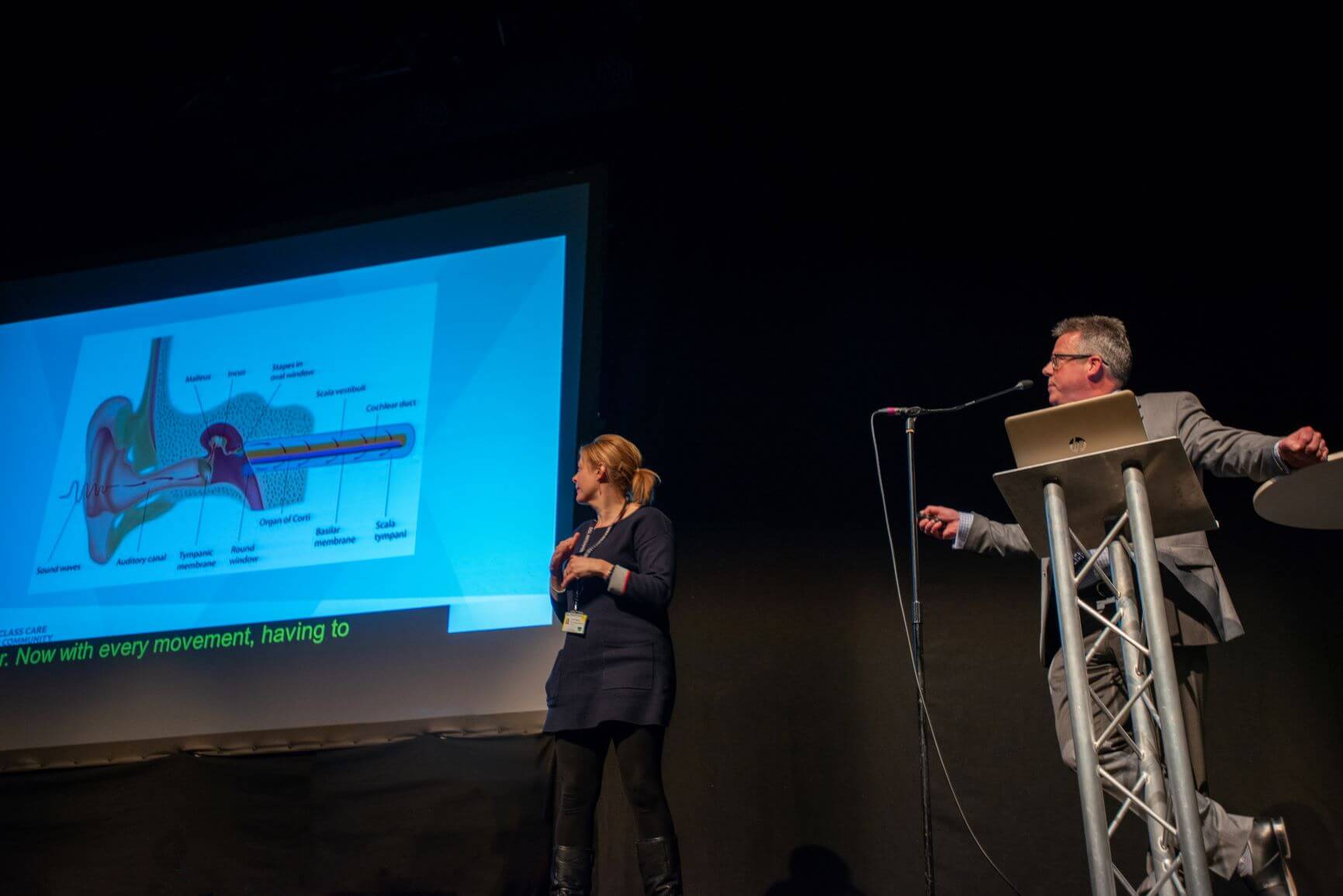 The 4th presentation was given by Dr. Hashir Aazh, who is the team lead for the Tinnitus and Hyperacusis Therapy Specialist Clinic as well as clinical research lead at Audiology Department, Royal Surrey NHS Foundation Trust. He talked about a specialised method of Cognitive Behavioural Therapy (CBT) delivered by audiologists which aims to help to modify the process that causes tinnitus-related annoyance. He described that once the annoyance caused by tinnitus has subsided with the help of CBT, it is more likely that the perception of tinnitus also reduces. In a pioneering study, Dr Hashir Aazh, in collaboration with Professor Brian C.J. Moore and Dr Christina Bryant (School of Psychological Sciences, University of Melbourne) explored the views of patients who completed audiologist-delivered CBT regarding: (1) the effectiveness of the treatment, and (2) the acceptability of receiving CBT from audiologists. This is one of the first studies assessing the patients perspectives on the acceptability of CBT for tinnitus and hyperacusis delivered by audiologists, as opposed to mental health professionals. One may have expected that, since CBT is typically offered in mental health settings, it would not be acceptable to patients seen in outpatient audiology clinics for seemingly ear-related disorders. He described that 97% of the patients reported that it was very acceptable to receive tinnitus-focused CBT from specialist audiologists and 87% of patients reported that they were able to manage their tinnitus differently compared to before you started your treatment. 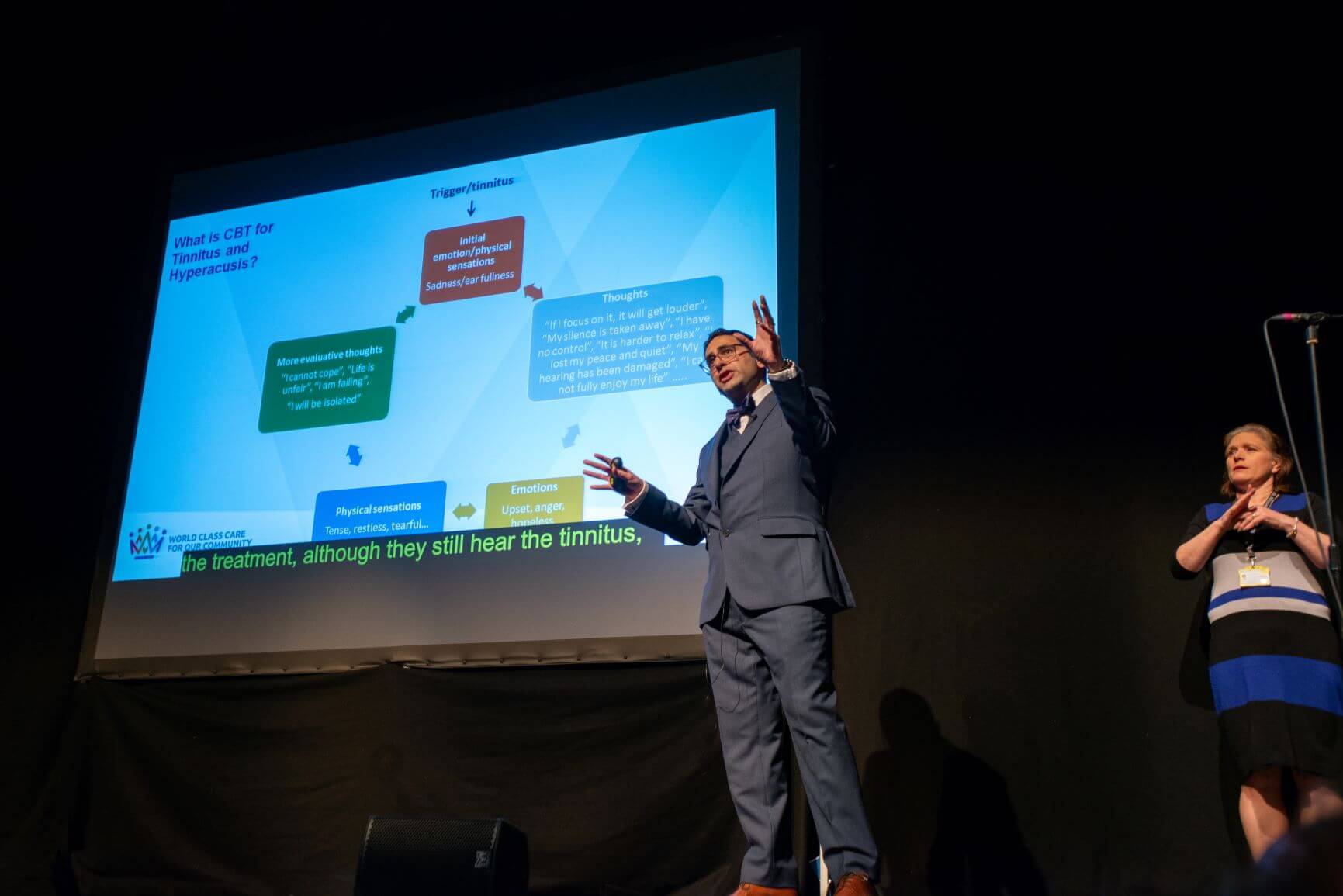 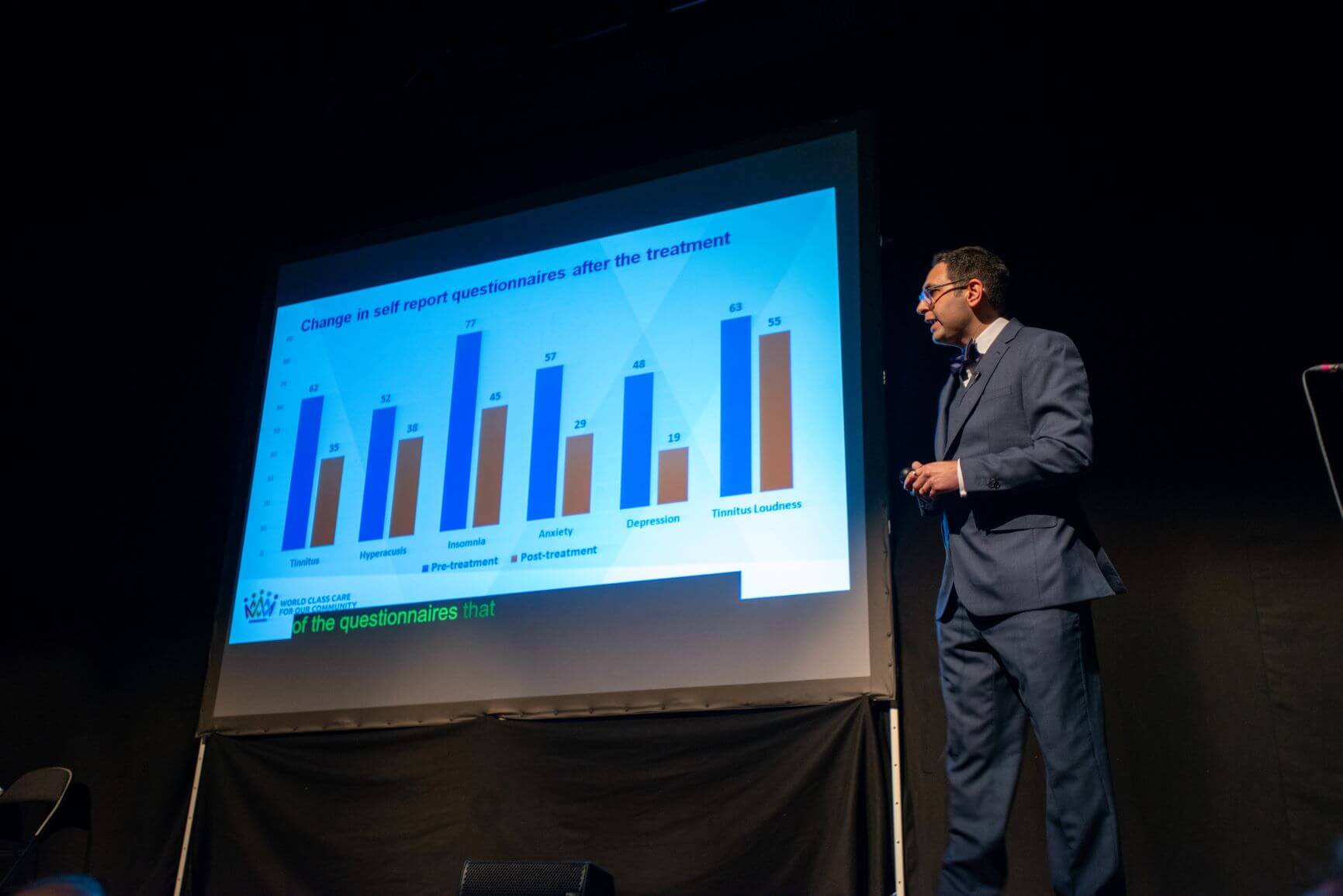 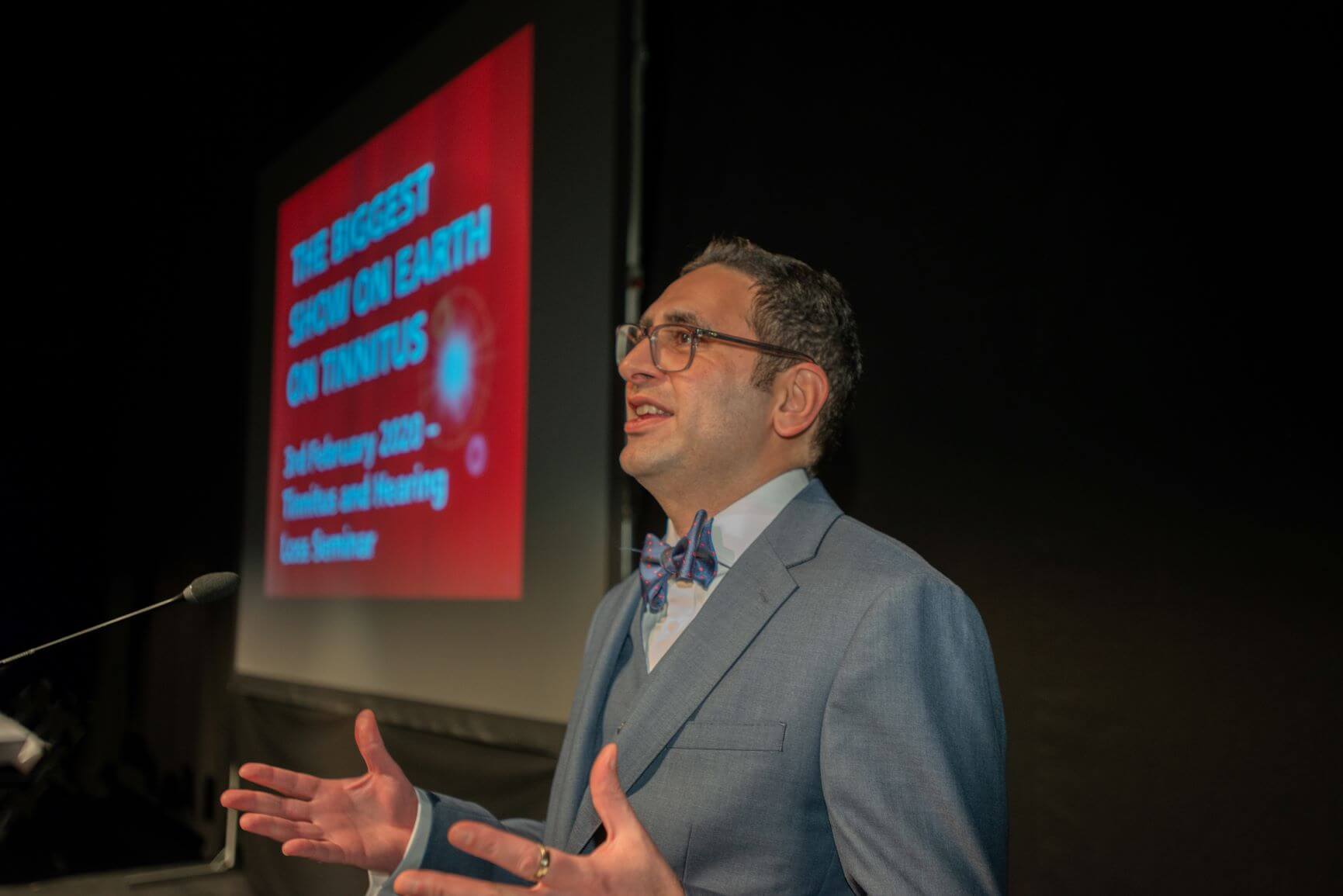 The 5th presentation was given by Dr Anna Pepler who is the team leader for Adult Services in the Audiology Department at the Royal Surrey NHS Foundation Trust. She talked about the developments in hearing aid technology that have greatly increased the range and capabilities available to suit the requirements of different hearing aid users. She described the many ways that hearing aids and assistive listening devices can be used to help and improve hearing and communication in a variety of scenarios. She concluded with offering some practical information which helped hearing aid users as well as non-hearing aid users to learn how they can engage with and benefit from assistive listening technologies. 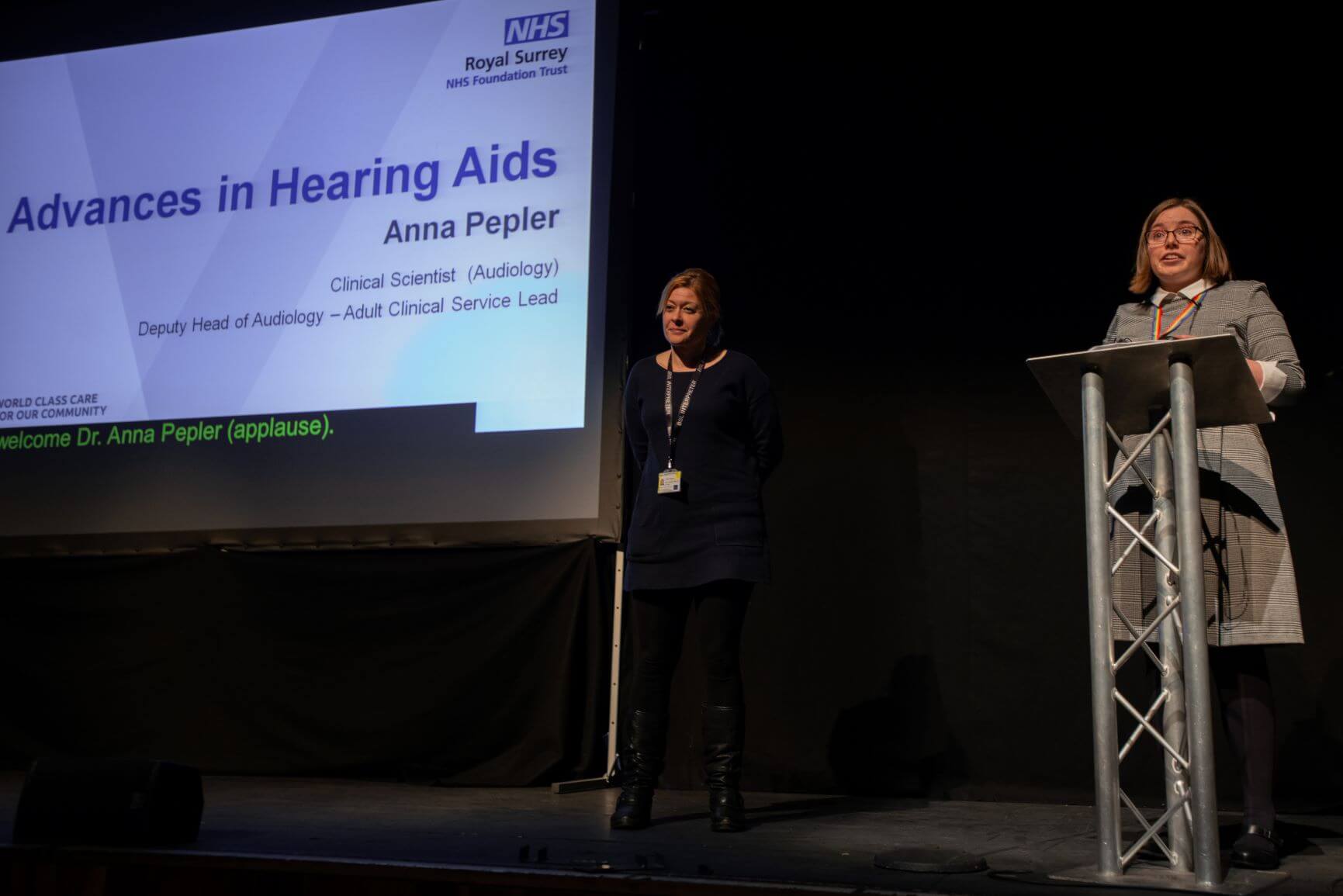 The seminar was concluded with a 1-hour long Q&A session moderated by Jemma Hatton who is a senior audiologist and specialist in Tinnitus & Hyperacusis Rehabilitation. 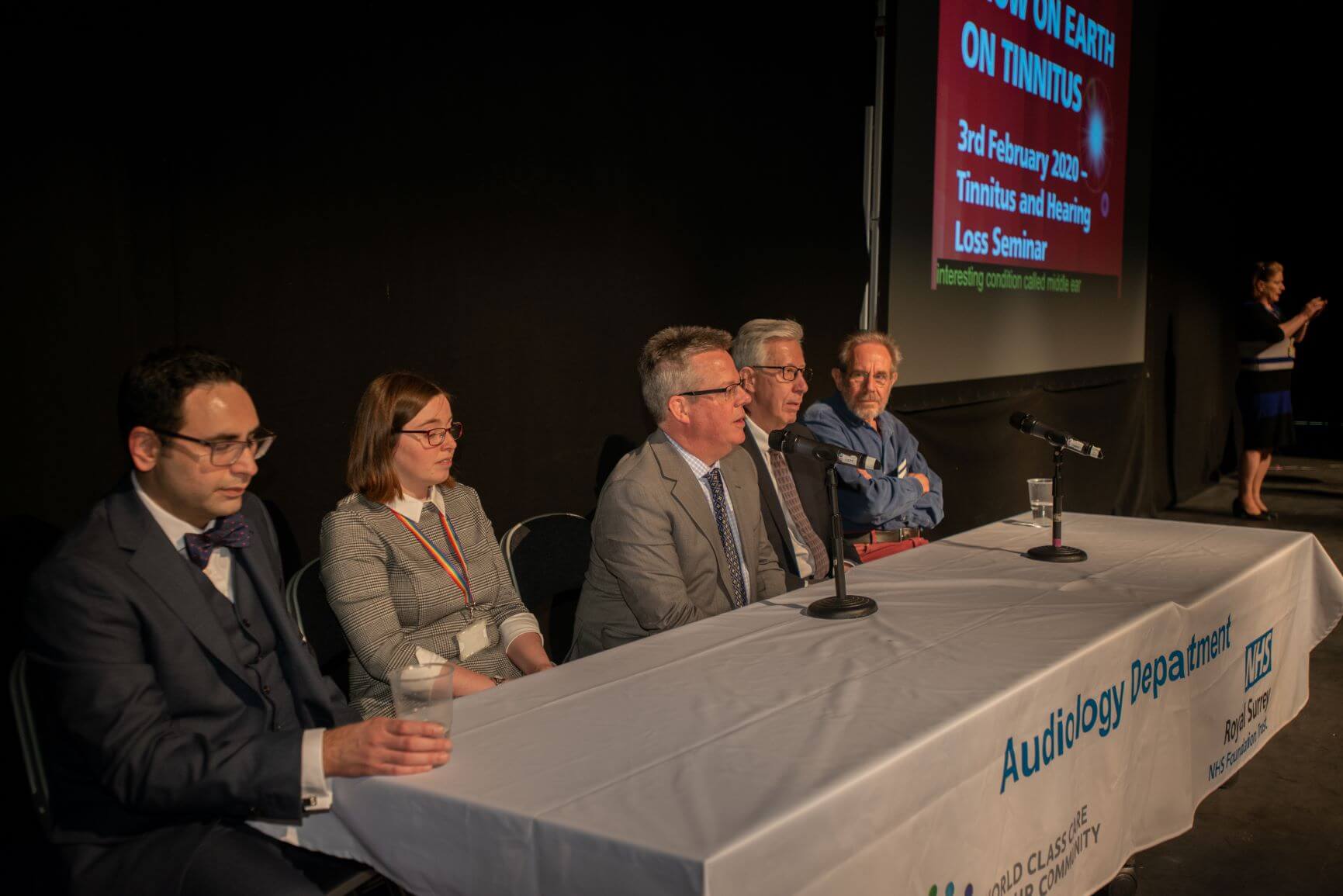 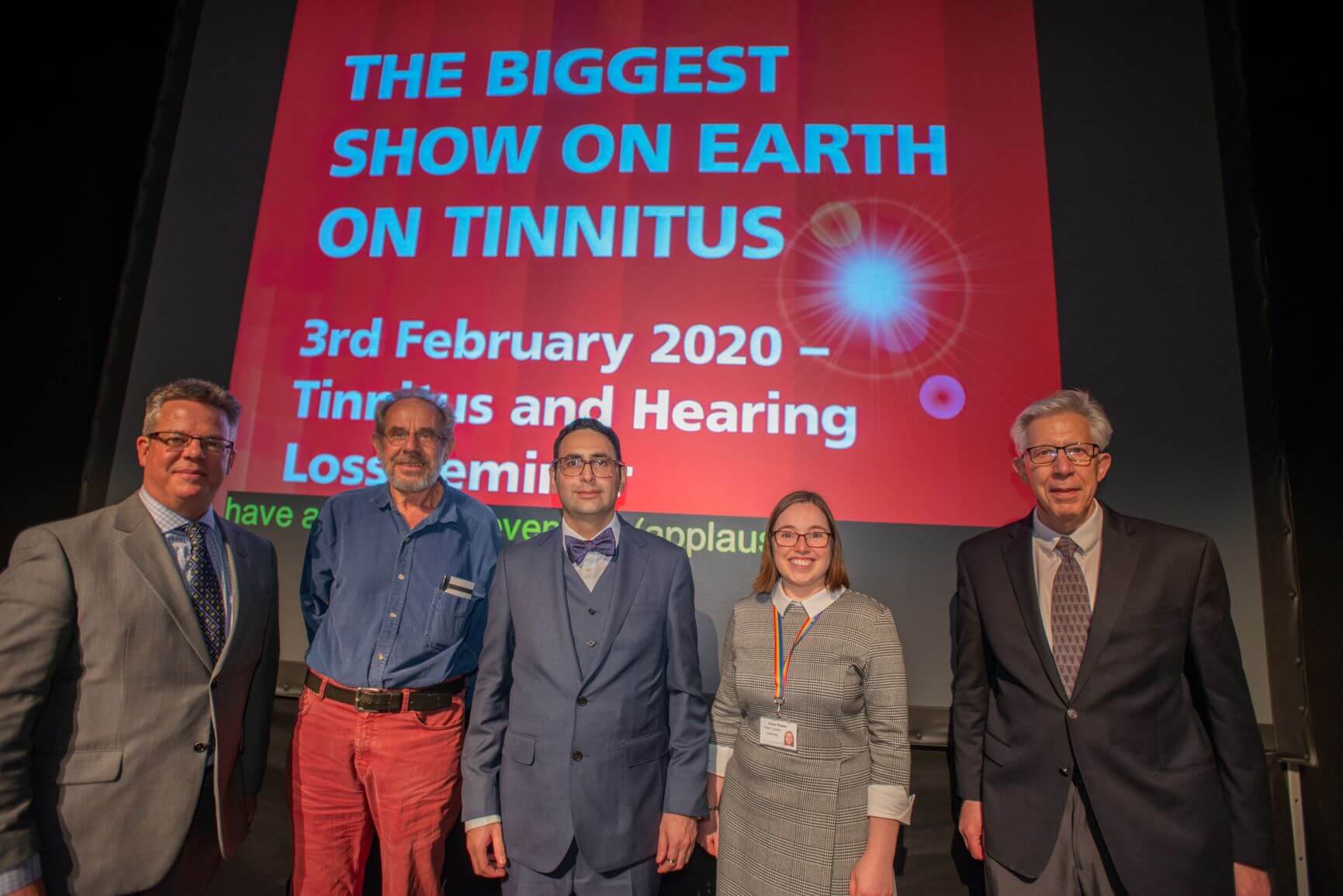