Tinnitus and hyperacusis in older people

Tinnitus is perception of sound in the ears or head with no acoustic stimulation. People typically describe their tinnitus as buzzing noise, high-pitched noise, hissing noise, whistle, waterfall and grinding wheel, ringing, white noise, wind noise, bubbles and clicks, beep, and humming noise. About 20% of patients are unable to describe what their tinnitus sounds like. Hyperacusis is intolerance to certain everyday sounds that causes significant distress and impairment in social, occupational, recreational, and other day-to-day activities.

It is debatable how old is old. In our research, patients over the age of 60 yrs were classified in geriatric group. This is chosen to be consistent with the age at which hearing loss tends to become sufficient to start producing problems in everyday life (Davis 1989; Agrawal et al. 2008).

Tinnitus and hyperacusis disability and handicap are related to activity limitations (e.g. problems with sleep, concentration and hearing) and participation restrictions caused by these symptoms (e.g. withdrawal from social situations, problems at work and relationship difficulties) and their impact on the individual’s psychological wellbeing and health-related quality of life (WHO 1999). Factors related to tinnitus and hyperacusis handicap may be different for older populations because the odds of hearing impairment, insomnia, anxiety, depression, cognitive and physical decline, and reduced self-perceived health-related quality of life increase with increasing age (Davis 1989; Dawes et al. 2014; McCall 2004; Lenze & Wetherell 2011). It is important to explore the factors associated with tinnitus and hyperacusis handicap in order to design appropriate rehabilitative interventions, since “cures” for these conditions are currently not available (Tyler & Baker 1983). Recent research by Dr.Aazh’s tinnitus team assessed tinnitus and hyperacusis handicap and factors associated with them for older patients. The key findings are summarised below:

Sometimes patients ask if there is an optimum age to receive therapy for tinnitus and/or hyperacusis. Often older patients may be reluctant to undergo treatment as they may think it is too late for achieving considerable improvement due to their age (Aazh & Moore 2018b). Dr. Aazh’s tinnitus team explored the relationship between the changes in effect of tinnitus on life before and after audiologist-delivered CBT and age in over 500 patients. As shown in the scatter plots, there was no significant correlation between the change in severity of tinnitus impact following treatment and age. This highlights that regardless of the age, patients may benefit from the treatment. 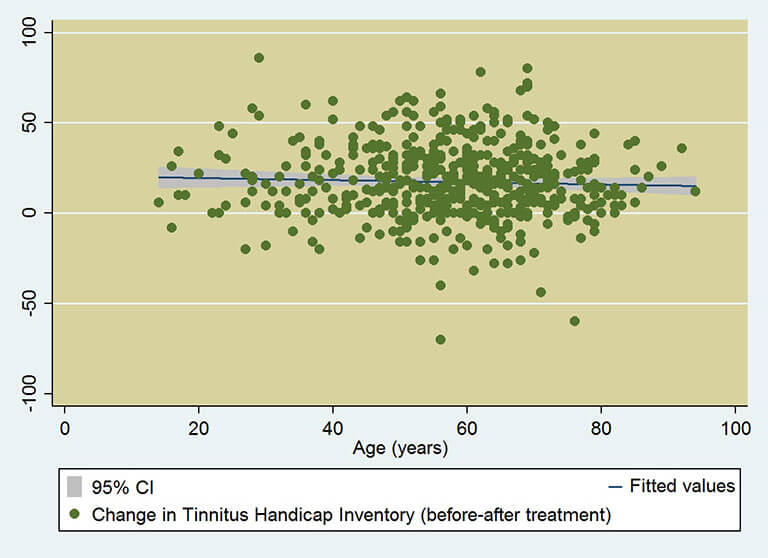 Dr. Aazh’s tinnitus team also explored the relationship between the changes in hyperacusis before and after audiologist-delivered CBT and age in over 500 patients. Their results showed no significant correlation between the change in hyperacusis following treatment and age. So it is important to highlight that patients may benefit from the treatment regardless of their age. 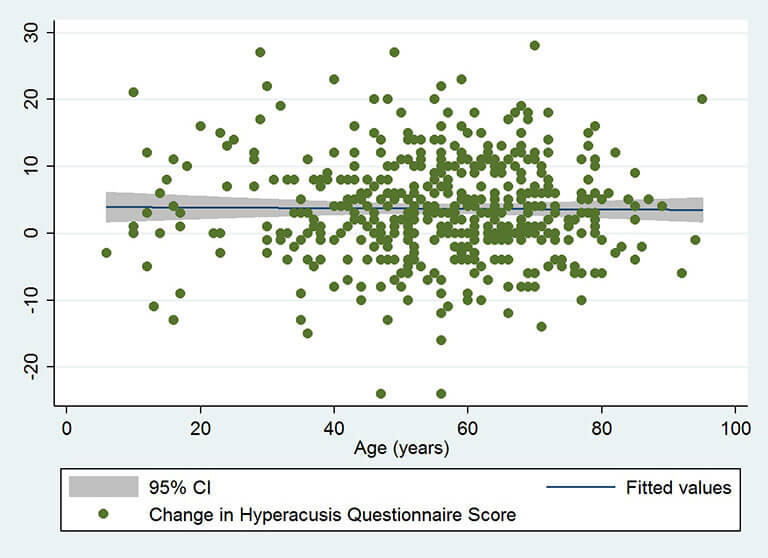 Should I use hearing aids to minimise the effect of tinnitus?

Despite the high prevalence of tinnitus among patients with hearing loss and vice versa, our result did not show a significant relationship between hearing levels and effect of tinnitus in patients over the age of 60. Nevertheless, when older patients complain of tinnitus, their hearing should be assessed. Fitting of hearing aids to address hearing impairment may or may not reduce the effect of tinnitus. In a study that assessed patients’ perspectives on the effectiveness of various clinical interventions in the management of tinnitus and hyperacusis (Aazh et al. 2016), use of hearing aids was rated as ineffective by 36% of patients, and all of those who reported that hearing aids were effective also reported that the counselling component of their treatment was effective in the management of their tinnitus or hyperacusis (see the bar diagram). Therefore, it is difficult to determine whether the hearing aids were an effective component of the treatment package. 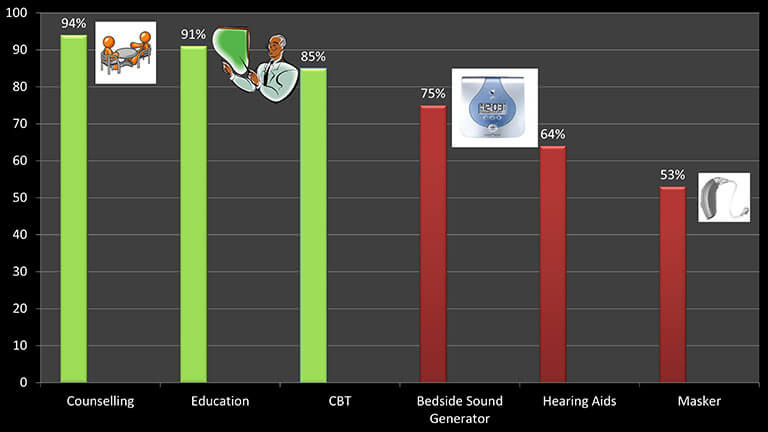 What are the key factors related to effect of tinnitus on patients’ life?

In our study, tinnitus loudness did not predict the effect of tinnitus on patient’s life, while tinnitus annoyance did. Some people with louder tinnitus were not bothered by their tinnitus and some with quieter tinnitus were severely affected. This highlights the relevance of audiologist-delivered CBT for tinnitus (Aazh & Allott 2016; Aazh & Moore 2018b; Aazh & Moore 2018a). During CBT, specialist audiologist uses careful questioning and empathic listening skills in order to help the patient to explore the underlying mechanism in which tinnitus produces annoyance and help them to modify that.

Is insomnia in older patients related to tinnitus or to depression?

Our results showed that more severe insomnia was associated with more severe depression symptoms and was not related to any of the measures of tinnitus. 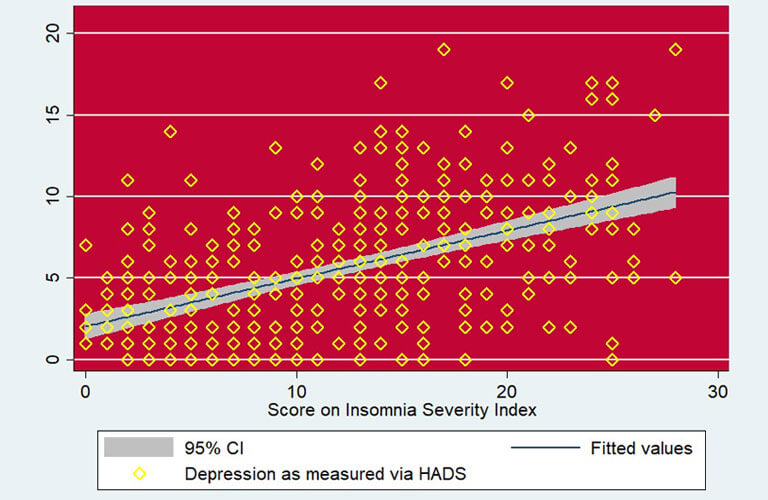 As shown in the scatter plot, insomnia in older people was significantly predicted by depression scores in our study. It is known that depression is more prevalent in older than in younger people (Mirowsky & Ross 1992). A relationship between depression and insomnia in older people has been suggested by several researchers (Foley et al. 1995; McCall 2004). If insomnia does not contribute directly to tinnitus handicap in older people, then it may not be necessary to address insomnia in the context of tinnitus rehabilitation. Perhaps insomnia needs to be assessed and managed independently from tinnitus in conjunction with treatment for depression. It is unlikely that using distractions sounds generated via bedside sound generators offer a reliable solution for insomnia in older tinnitus patients.

What are the factors related to hyperacusis in older patients?

Depression was the main predictor of hyperacusis handicap. This highlights the need for psychological assessment in older patients who experience hyperacusis. The scatter plot illustrates a more recent analysis by Dr.Aazh’s tinnitus team on the relationship between depression and hyperacusis involving over 400 patients. 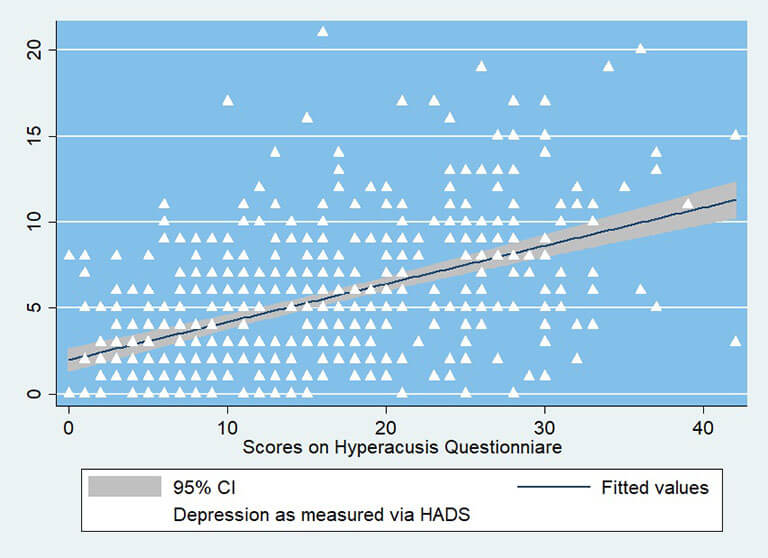 Aazh, H., & Moore, B. C. J. (2018a). Effectiveness of audiologist-delivered cognitive behavioral therapy for tinnitus and hyperacusis rehabilitation: outcomes for patients treated in routine practice American Journal of Audiolgy, [Epub ahead of print], 1-12.

Aazh, H., & Moore, B. C. J. (2018b). Proportion and characteristics of patients who were offered, enrolled in and completed audiologist-delivered cognitive behavioural therapy for tinnitus and hyperacusis rehabilitation in a specialist UK clinic. Int J Audiol, 57, 415-425.

Davis, A. C. (1989). The prevalence of hearing impairment and reported hearing disability among adults in Great Britain. Int J Epidemiol, 18, 911-7.